New York — Shortly before CNN unveiled the new studio it had built in Manhattan for Paula Zahn's "American Morning" last month, a telephone rang at the desk of a reporter.

A publicist for Fox News Channel was calling. For anyone writing about Zahn's show, she wanted to point out how much better Fox's morning show, "Fox & Friends," was doing in the ratings.

With that in mind, CNN's new studio "is nothing more than rearranging the deck chairs on the Titanic," Fox spokeswoman Tracey Spector said.

As digs go, this one was relatively mild. But it follows a pattern.

Ever since Zahn jumped from Fox News Channel to CNN last fall, her former employers have badmouthed her relentlessly. The jibes are sometimes brutal, sometimes humorous, and once even profane. The underlying message seems clear: It's not wise to cross Fox News Chairman Roger Ailes.

Zahn was host of a prime-time news hour on Fox News Channel last year when CNN weighed in with an offer she couldn't refuse ï¿½ her own three-hour morning show, reportedly at twice the salary.

When Ailes learned of the offer, he fired her. CNN immediately signed Zahn and put her on the air six months earlier than it had expected.

That dismissal is an important distinction to Fox. More than a year after it happened, network representatives called The Associated Press to complain that a story about Zahn did not say she was fired.

Ailes set a tone for the post-Zahn era with a comment that quickly became legendary, in part with the help of Fox's on-air personalities. In an article about Zahn's firing, he minimized how she had improved ratings in her time slot while at Fox News Channel.

"I could have put a dead raccoon on the air this year and got a better rating than last year," Ailes told The New York Times. "That's all just the growth of our network. All our shows are up."

Subsequently, the "Fox & Friends" anchors talked about Zahn on the air with a stuffed raccoon toy on the table in front of them. Fox anchor Steve Doocy, cameras in tow, presented Zahn with a gift basket including the stuffed raccoon after the new studio opened. 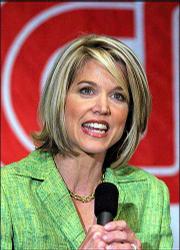 Paula Zahn speaks at a news conference where CNN announced that she would join the all-news network as anchor of its new "American Morning" show in this Sept. 6, 2001, file photo. More than a year since Zahn jumped from Fox News Channel to CNN, her former employers and colleagues continue to badmouth her.

"From the very beginning, this was a case of sour grapes by Roger Ailes," Zahn said at the time. "I am glad the judge saw it for what it was and dismissed the suit as meritless."

During the past year, Zahn's "Fox & Friends" rivals have been her most frequent needlers.

In January, the disc jockey Mancow, a "Fox and Friends" contributor, called Zahn a "knucklehead." Because she's the enemy, he said, "I just want to punch her in the face."

Mancow also made an off-color remark about Zahn that refers to the anchor's hobby as a cello player.

Last month, Fox News Channel spokesman Robert Zimmerman was quoted in the Atlanta Journal-Constitution: "Paula Zahn's supposed attempt at reinventing herself as a journalist is like putting a fresh coat of paint on an outhouse."

Zahn would not comment for this story, but her network came to her defense. CNN spokeswoman Christa Robinson said Ailes seemed obsessed with his lost anchor.

"At first it was somewhat amusing, but one year later it's getting old and, frankly, a little bizarre," she said.