Costello can still 'Pump It Up'

Though Elvis Costello long ago shook off the tired "angry young man" mantle, Wednesday night at Kansas City's opulent Midland Theatre, he demonstrated that there's still fire in his belly. Touring the country fronting a straight ahead rock band for the first time in a number of years, eschewing the saloon-singer balladry of recent tours, he demonstrated that he still can put his heart and soul into ripping rock and roll. 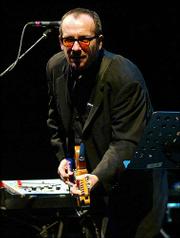 Costello knows his strengths and how to play to them. Now over 25 years into his performing career he knows when to croon and when to shout, when to bring his uniquely jagged guitar playing to the fore and when to let his band do the heavy lifting.

Costello's band is the aptly named Imposters, consisting of two-thirds of his original backing band the Attractions; keyboardist Steve Nieve and drummer Pete Thomas, but there is a gaping hole in the sound where stellar bassist Bruce Thomas used to ply his talents. Imposters' bassist Davey Faragher (Cracker, John Hiatt) does yeoman's work, but Thomas's playing was often the unifying musical core of the great Attractions material.

Costello also knows how to work a room and an audience. At 48, most of his fans are his contemporaries. A theatre is not a sweaty night club and the Midland's plush, wide, reclining seats create a challenge for a performer intent on getting his older fans up off their increasingly plush, wide seats. Astutely, Costello presents almost half of his show during the two, extended encores, when the audience is guaranteed to be on its feet.

Over the course of two and a half hours Costello performed 28 songs going back to his debut release "My Aim Is True," and up to his most recent recording, "When I Was Cruel." He included lesser known gems such as "Love Field" and "Indoor Fireworks" and staples like "(I Don't Want To Go To) Chelsea" "Radio Radio" and "Alison."

Costello, always one to keep things interesting, included "My Mood Swings" from the Coen Brothers' film "The Big Lebowski" and "The Judgement," a song he wrote for a recent Solomon Burke release.

The expected, well-placed covers and musical quotes included "My Funny Valentine" during "When I Was Cruel No. 2," a highlight of the concert. Others were Brook Benton's "He'll Have To Go" and Elvis Presley's "Suspicious Minds" during "Alison" and Smokey Robinson's "You Really Got A Hold On Me" toward the end of "Deep Dark Truthful Mirror."

Costello closed the show with as chilling a performance of "I Want You," an ode to being someone's romantic leftovers, as a fan could ever hope for. Though the sound in the cavernous theatre verged on being muddy at times, the strength of the performance overwhelmed the small distraction that presented.