Toronto — Some celebrated names have stood under the arched ceilings of Hart House, an ivy-covered building on the campus of the University of Toronto. John F. Kennedy, then a senator, once spoke here. Pianist Oscar Peterson headlined a black-tie concert. Atom Egoyan, now an acclaimed director, worked on a student film.

Countless others have made quieter impressions, among them a young Indian immigrant who 20 years ago won back-to-back story contests sponsored by Hart House and went on to publish fiction praised worldwide.

Rohinton Mistry is the author of four books, most recently "Family Matters," his third novel to be a finalist for the Booker Prize. The 50-year-old author has long been established in the literary field, but he found himself in a different crowd last year when Oprah Winfrey picked an earlier work, "A Fine Balance," for her book club.

It didn't matter that the novel was 600 pages long and that Mistry was virtually unknown to the general public. Hundreds of thousands of copies were sold, and Mistry was, briefly, a celebrity ï¿½ flown to Bombay, India, and interviewed by Winfrey.

"There was nothing painful at all about it. It was light and pleasant and fun," he says.

Mistry's publisher, Alfred A. Knopf, is hoping the good word from Winfrey, who suspended her club last April, will carry on to his new book. "Family Matters" has a first printing of 75,000, seven times greater then the first printing of "A Fine Balance," and the author has been touring in the United States and Europe.

But there is no guarantee, or even likelihood, Mistry will receive such attention again. Readers apparently respond more to Winfrey than to the writers she favors, with such past picks as Mary McGarry Morris and Jacquelyn Mitchard not selling nearly as well with subsequent books.

"It is shocking to see how little effect Oprah can have on a follow-up novel," says Laurie Brown, a senior vice president of sales and marketing at Harcourt who worked on several Oprah books during previous stints at Vintage Books and Farrar, Straus & Giroux.

A less interrupted life would not disappoint Mistry, who as a young man performed Bob Dylan songs in Bombay clubs, but later realized he preferred the "solitude of the act of reading and writing." 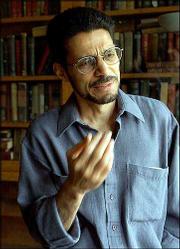 Rohinton Mistry is the author of four books, most recently "Family Matters," his third novel to be a finalist for the Booker Prize. Mistry's books became popular when an earlier work, "A Fine Balance," was featured on Oprah Winfrey's book club.

"Solitude" ï¿½ long, evening walks on campus ï¿½ defines his memories here and make the university an appealing place for him to see reporters. On a recent sunny morning, he sits in a bright, breezy conference room at Hart House, windows open to a courtyard below ï¿½ empty now, but slowly filling with freshmen gathering to a lunchtime barbecue.

If appearance could be likened to prose style, then Mistry is a minimalist. He is a slender, studious figure: plainly dressed, dark hair brushed back evenly, beard finely trimmed. He endures, rather than enjoys interviews, regarding them soberly as arranged meetings, however "light and pleasant," with strangers.

Mistry was born in 1952 in a comfortable household where servants brought him tea and English was spoken as much as Hindi. After studying at the University of Bombay, he left for Canada, in 1975, in search of economic, not literary opportunity.

"The University of Bombay was just something to pass the time," he says. "I took mathematics because that is what was expected. You had to take a science subject, not art, because the boys and the men had to get good jobs later on.

"But in Toronto, after I began working at a bank, I thought I would just take some courses in things I might enjoy and I always enjoyed reading. I thought I might study English literature, just to make the day more interesting after work."