Quilter's work on exhibit in Memphis

For Marla Jackson, it wasn't a great beginning.

"I was kicked out of my sewing class in ninth grade. It was a tailoring class, and I was terrible. The teacher finally looked at me and said, 'You're out of here!'" she recalled, laughing.

Jackson was so turned off by the experience, she didn't pick up needle and thread again until she was 28 and having children.

It wasn't until 1997 that Jackson eventually discovered quilting.

She was chatting with a developmentally disabled client at Community Living Opportunities in Lawrence, where Jackson used to work. The woman, named Etta, caught Jackson's attention because she was stitching a quilt block that she had learned to sew in a quilting class.

"It just looked interesting to me," Jackson said.

So she paid Etta $25 ï¿½ the same amount the client had paid for her quilting class ï¿½ and asked the woman to show her how to quilt.

And that's how it started.

Five years later, quilting is Jackson's passion, and she's drawing plenty of accolades for her unique style of artistry.

The Watkins Community Museum of History, 1047 Mass., displayed a collection of eight of her quilts in an exhibit called "Truth of Soul," held from October 2001 to January 2002. The quilts, which have a patchy, folk-art charm, depict important events in Jackson's life, document her family's heritage and share the sometimes painful but always proud experience of being an African-American woman.

The exhibit was a hit.

Marla Jackson, Lawrence, has emerged as an accomplished quilter and has one of her quilts on exhibit in the National Civil Rights Museum in Memphis, Tenn. Her quilts also have been displayed at the Watkins Community Museum of History.

"It was one of the most popular things we've ever done," said Steve Jansen, the museum's historian.

He's a big fan of Jackson.

"Marla's quilts are very powerful and moving. For me, they're especially pictorial. They make parts of her life come alive, and her experiences are translatable to other people," he said.

Her quilts have also been displayed in the Kansas Union on Kansas University's campus during the Langston Hughes international symposium held in February, as well as at the Lawrence Public Library. 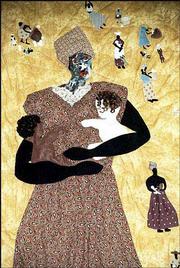 Marla Jackson's quilt "Corporate Day Care," is part of an exhibition of quilts by African-Americans on display at the National Civil Rights Museum in Memphis, Tenn.

These days, Jackson's work is drawing attention in a higher-profile setting.

"Corporate Daycare," one of her quilts that was shown in the Watkins Museum, is part of a current exhibit at the National Civil Rights Museum in Memphis, Tenn. The exhibit, titled "Finding Voice, Creating Vision," features 35 quilts made by African-American women.

It examines how quilts have offered a means of expression and empowerment in a medium of women's own making, to be shared almost exclusively with other women.

The exhibit, which opened Sept. 28, will be displayed through Dec. 31.

"It hasn't even hit me yet. I'm proud to a part of the history there. It's an honor and a privilege to have my work presented in the museum," Jackson said.

The exhibit's curator is Carolyn Mazloomi, author of the book "Spirits of the Cloth: Contemporary African-American Quilts" (Clarkson/Potter Publications, 1998). Mazloomi had heard about Jackson's work through another quilter, Sherry Whetstone-McCall, a woman from Liberty, Mo., who is featured in Mazloomi's book. The author contacted Jackson last spring and asked her to submit slides of some of her quilts to be considered for the exhibit at the Civil Rights Museum.

"I submitted my slides to her, then I got a phone call from her saying she was interested in having 'Corporate Daycare' in the exhibit," Jackson said.

The quilt Mazloomi chose for the museum display depicts an African-American woman ï¿½ a slave ï¿½ standing in a cotton field while hugging a black baby and a white baby to her chest. Many times, Jackson explained, slave women had to take care of their children while they worked. And many of them would breastfeed the white children of their masters. In the quilt's background, other women are picking cotton, tending to children and performing chores.

The scene shown in the quilt holds special meaning for Jackson.

Her great-grandmother, Lucille Crum, was once a slave. When she was 10, Crum witnessed her mother being sold to the highest bidder at an auction.

Jansen was delighted to hear that Jackson's quilt would be displayed in the Civil Rights Museum. But he wasn't surprised.

"This is not going to be the last national show that Marla's involved in. Her work is going to be seen many, many places. She's a distinctive artist, and I think her message is universal," he said.

Jackson's initial interest in quilting was sparked by a visit she made to Washington, D.C., in October 2000.

"There was a traveling, African-American quilt exhibit at the Smithsonian Institute. Man, when I looked at those quilts, I said, 'I can do that.' I was so inspired. And I just decided this was what I wanted to do. Once I started, I couldn't stop," she said.

That exhibit was "Spirit of the Cloth," organized by Mazloomi.

When Jackson isn't busy with her job as a residential supervisor for Cottonwood, Inc., which serves developmentally disabled adults in Douglas County, she can be found quilting.

"It brings about inner peace for me. It takes me to a level inside I didn't know I had. I think it's broadened me as a human being," Jackson said. "I want my quilts to give other people the same enjoyment that they give me. And I want them to make other people think. The quilts are reality ï¿½ they're what really happened, through my eyes."