Anthony LaPaglia reverses vanishing act for 'Without a Trace'

Los Angeles — Anthony LaPaglia hit an artistic high with the 2001 film "Lantana," in which he created a striking portrait of a police detective in full-blown midlife crisis.

It was such a fulfilling experience that the hardworking LaPaglia, at 42, toyed with the idea of giving up acting. He was lured back after a year off, however, by the CBS missing-persons drama "Without a Trace."

If that makes him sound like a dilettante retiree, forget it. He's so candid in assessing why few projects equal "Lantana" ï¿½ or even try ï¿½ that a listener fully believes LaPaglia would walk away from his craft.

"Sometimes I really get the chance to do something juicy and rise to the challenge. But, to be perfectly honest, by and large most stuff being made today has no substance whatsoever," he said.

"Lantana," one of the recent rare films that assumed moviegoers might be older than 25 and willing to invest time in the complex emotional lives of grown-up characters, became a benchmark for LaPaglia.

"I always said to myself if I could do one great movie in my life, I would be a happy man. Until 'Lantana,' I did not have that opportunity. And after I did 'Lantana' I felt I had done that movie."

Steadily employed in both stage and screen, LaPaglia won a Tony Award in 1998 for the Broadway revival of Arthur Miller's "A View From The Bridge." His wide-ranging comedic and dramatic work, more than 50 projects, includes the TV series "Murder One," and the upcoming film "Analyze That." He played the fondly remembered Simon Moon ("I adored that character") on "Frasier."

Post-"Lantana," LaPaglia figured he could avoid bitter-actor syndrome by just quitting while he was ahead. 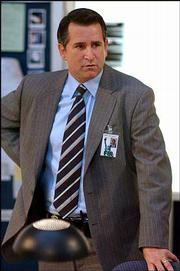 Anthony LaPaglia stars as FBI senior agent Jack Malone in CBS' "Without A Trace," a new drama about the FBI's Missing Persons Squad.

He looked forward to spending more time with his wife, actress and fellow Australian Gia Carides, whose roles include cousin Nikki in "My Big Fat Greek Wedding." The year off was spent happily and fruitfully at home ("I read a lot of books and didn't miss acting at all").

Then his agent entreated him to consider the pilot script for "Without a Trace" and the role of Jack Malone, head of a crack FBI unit dedicated to finding the vanished.

He read it, liked it, met with the producers and took the role.

LaPaglia has been pleasantly surprised in the early going of "Without a Trace," which airs at 9 p.m. Thursday and co-stars Poppy Montgomery, Marianne Jean-Baptiste, Eric Close and Enrique Murciano.

With the show's cushy spot following top-rated drama "CSI: Crime Scene Investigation," "Without a Trace" has made an early strong showing. It's the second most-watched new drama, behind only "CSI: Miami," and is the most competitive CBS show against NBC's "ER" since the medical drama premiered in 1994.