Haynes gets behind the 'Mule'

The latest incarnation of Gov't Mule lets questions about the future wait.

If Warren Haynes and his band Gov't Mule are unfamiliar to you, chances are that some of the guests on the group's recent release, "The Deep End Vol. 2," are not.

The CD (and its predecessor "The Deep End Vol. 1") was produced as a tribute to Allen Woody, Gov't Mule's founding bassist who passed away in 2000. Among those appearing on bass are Jack Bruce, Flea, John Entwistle, Bootsy Collins, Les Claypool, Phil Lesh, Mike Watt and Jason Newsted.

When the time came for Haynes and Abst to consider just how the Mule should continue, they chose to invite several dozen of Woody's favorite bass players to join them in recording the songs for a tribute. To their surprise, nearly everyone they approached said yes.

"We made this long list of bass players thinking a lot of them would be unavailable or just not interested, and when everybody said yes we had to rethink our situation and that's why it turned into two CDs," Haynes says. "It was this whole community vibe. Les Claypool helped us get Mike Watt; Mike Watt helped us get Flea; Chris Squire helped us get John Entwistle; Bernie Worrell helped us get Jack Bruce and Bootsy Collins.

Gov't Mule is nothing if not eclectic. ("Our taste runs the whole gamut and is a wider scope than some people may expect," Haynes says.) Who else would incorporate everything from Radiohead to The Grateful Dead and from John Coltrane to Black Sabbath in their live sets? When it came time to record the two volumes of "The Deep End," that inclusiveness was exploited.

"Each song takes on a bit of a different character because we're showcasing the bass player that's playing each track, and in some cases the special guests other than the bass players were chosen with those reasons in mind. As an example, when we recorded with Bootsy Collins and Bernie Worrell it's half Gov't Mule and half Funkadelic, so it's only fair that it sounds like that."

This process helped formalize the transition from guitar trio to a quartet, a change that had already begun with the inclusion of keyboards on several tracks on "Life Before Insanity." 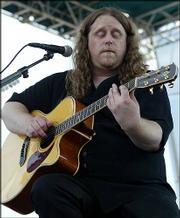 "It frees me up in some ways to concentrate more on singing and it also gives me another chordal instrument to bounce off of," he says.

"Danny is now a full-fledged member," he says. "We're just now announcing that but Danny has come on board and is now part of Gov't Mule."

Picking up the pieces

The decision for Gov't Mule to carry on following Woody's death wasn't simple, but Haynes notes that had the Allman Brothers Band called it quits following the deaths of Duane Allman or Berry Oakley then he and Woody would never have met.

Haynes and Woody both joined the Allman Brothers Band in 1989 and were instrumental in helping generate a recaptured vitality during the '90s. With drummer Matt Abst, the pair formed Gov't Mule in 1994 to be what Haynes calls an "improvisational power trio," something he felt no one else was doing at that time.

During 2000, following their third studio release, "Life Before Insanity" and the death of Woody, personal problems led to Allman Brothers Band cofounder/guitarist Dickey Betts' forced departure from that group. The band called upon Haynes to fill the slot left vacant.

Next spring Haynes will release an album of live, solo acoustic performances. It will be the guitarist's first solo release since 1993's "Tales Of Ordinary Madness." The solo recording will follow close on the heels of both upcoming Phil and Friends CD and the first new Allman Brothers studio project in nine years.

Following that trio of releases, Haynes will take Gov't Mule back into the studio for the band's first album of new material since 2000's "Life Before Insanity."

For the leg of the tour that brings the act through Lawrence, George Porter Jr., founding member of The Meters, will be featured on bass. Although Gov't Mule will once again use a platoon of bass players, including Widespread Panic's Dave Schools and Deep Purple's Roger Glover.

"We're going to continue to utilize a rotating roster," explains Haynes. "When that's done and we take a break and start contemplating what's gonna be the next Gov't Mule record it'll be time for us to make the decision on who the permanent bass player is gonna be. It's something that we're looking forward to, but we're not quite there yet.