Gov't Mule might be a '60s-styled, jacked-up, blues-rock band or a hippie jam band. Or perhaps the Mule is a vehicle for Warren Haynes, the ultimate anachronism; a guitar hero. Friday night, in front of a packed Liberty Hall crowd, Gov't Mule played two sets and an encore that spanned more than three hours yet left fans, some traveling from as far as Denver or Chicago, hollering for more. 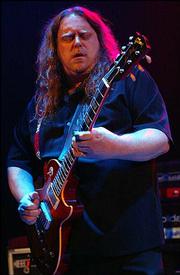 Gov't Mule's lineup continues to morph. In the two years since founding bassist Allen Woody's death, a rotating roster of bass players and keyboard players has been part of the touring band led by Haynes and cofounding drummer Matt Abst.

Last time through this area, Chuck Leavell of Allman Brothers and Rolling Stones fame handled keys and Oteil Burbridge of the Allmans played bass. Now the keyboard seat has been officially given to Danny Louis, whose gritty, roadhouse style lends itself well to the harder edge the band tends to lean toward.

On bass, Gov't Mule showcased a pair of standouts that split duty over the course of the night. Veteran musician George Porter Jr., a founding member of New Orleans legends The Meters, opened and closed the show, and his groovier, funkier style positively lit up the tunes he played on.

His contributions were most evident when the band broke out a first time performance of "Play Something Sweet (Brickyard Blues)," an Allan Toussaint composition made popular in 1974 by Three Dog Night. The song wasn't new for Porter; he played on the original Toussaint recording.

The bassist was also key to the brilliant rendition of Howlin' Wolf's "How Many More Years" that closed the first set. The number began as a traditional blues performance and then transitioned into a cover of Led Zeppelin's version of the song.

The second set held numerous highlights such as "World Of Confusion" from the recently released "The Deep End Vol. 2," the second of a pair of CDs recorded as a tribute to the band's late bassist. 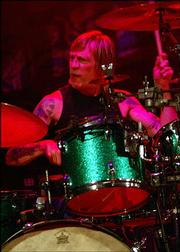 In the second set, drummer Abst performed a solo that was a demonstration of both his technical prowess and his improvisational creativity. Named this year by Drum! magazine as the best blues or R&B drummer in the world, Abst's playing throughout the show made the demonstration redundant.

Other standout moments were Robert Johnson's "32/20 Blues," Neil Young's "Cortez The Killer" and the incorporation of Prince's "When Doves Cry" as both the intro and coda to the Mule's own "Beautifully Broken."

Gov't Mule played with both intensity and joy throughout the 20-song performance, closing with the uplifting encore, "Soulshine."