"Full Cycle" is an improvised piece that differs each time it is performed. However, it still maintains the basic theme of connecting music, dance, movement, energy, improvisation and rhythm.

Urban Tap, founded and produced by Tamango, is a groundbreaking fusion of world cultures bringing together dancers, musicians and singers from around the globe. This pioneering group mixes cultures and styles, ranging from Indian vocalizing to Brazilian capoeira, from freestyle jazz and tap to hip-hop from the street culture. The show utilizes a disc jockey and live video feed.

Born in Cayenne, French Guiana, Tamango moved to Paris at age 8 and began a formal education in art. He started tap dancing in his early 20s at the American Center in Paris and the renowned Beaux Arts de Paris, which he left to join the "university of the streets" before moving to New York City.

He created Urban Tap in 1993, forming a group of like-minded, freestyle performers who shared a unique vision and deep passion for rhythm at the heart of dance and music. Tamango's creation made its theatrical debut at The Kitchen in New York City in 1999. The show earned Tamango a New York Dance and Performance Award, also known as a Bessie Award.

Since 1997, Tamango and his unique dance group have been performing internationally as part of "Cool Heat Urban Beat," which he choreographed and codirected with Rennie Harris. In addition to his work with Urban Tap, Tamango has shared the stage with dance legends Jimmy Slyde, Gregory Hines, Chuck Green, Buster Brown and Lon Chaney, and was a guest artist in the original production of "Riverdance." He has collaborated with Japanese performance artist Min Tanaka, French choreographer Philippe Decouflï¿½, jazz bassist Christian McBride and jazz pianist Barry Harris, among many others.

In May 1999, he premiered his artwork at 17 Creations in the Chelsea district of New York City. Upcoming exhibitions are planned in New York, Paris and Portland, Maine.

The show runs 90 minutes with no intermission. 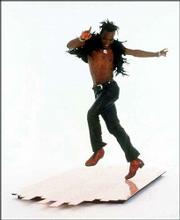 Urban Tap is a groundbreaking fusion of world cultures bringing together dancers, musicians and singers from around the globe.

While in Lawrence, Urban Tap will participate in the following residency activities:

ï¿½ Friday: School-only performance for grades 10-12, 1 p.m., Liberty Hall, with a technology tour after the performance.