"A little goes a long way," Kinnear says with a grimace. "Quite frankly, I didn't need to see that much. There was a very disturbing sense of emptiness."

Kinnear's starring role in "Auto Focus" represents the darkest move yet for the former talk show host, who began his film career with fluffy comedies.

The new movie focuses on Crane's final 17 years, tracing his rise as a TV star and his descent into sexual addiction, which would cost him two wives, professional success and eventually his life, when his skull was crushed by a camera tripod in 1978.

"It's not lost on me that this is a different kind of film for me," Kinnear says. "I'm not bludgeoned to death in any other of my movies."

A fan of Crane's since high school, Kinnear admired the actor's charm as he outwitted Nazis every week as the leader of imprisoned Allied POWs. Only later did he learn of Crane's seamier side.

The "Auto Focus" script describes how Crane became gradually obsessed with sex and began filming a steady stream of conquests after he teamed up with video technician Johnny Carpenter, played in the film by Willem Dafoe. 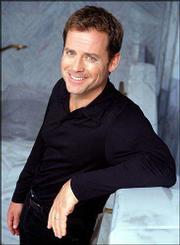 "He really just didn't seem to get it. He wasn't very introspective, I don't believe. He didn't seem to see himself in his own portrait. Bob never saw himself moving through the corridors of despair."

That's a quality Kinnear doesn't share. In fact, despite the physical similarity between Crane and Kinnear, it's hard to imagine two men more dissimilar in personality.

"In terms of my choices and general decisions in life, I am a bit of an anguisher. I have a difficult time ordering off the dinner menu much less general, bigger life choices," Kinnear says.

"I deliberate heavily before making choices and then I try to stay away from letting that little weasel of self-regret and self-doubt work its way into the back of my mind."

Director Paul Schrader was confident the likable Kinnear could be transformed into a man slowly spinning out of control, a role that required heavy doses of nudity and misogyny.

Kinnear, 38, began his career as the host of the snarky "Talk Soup" on E! Entertainment Television. He won a Daytime Emmy Award playing clips of trash TV like "The Jerry Springer Show."

In 1994, Kinnear found himself as the host of his own talk show after replacing Bob Costas on NBC's "Later." At the same time, he landed his first significant film role in "Sabrina," with Harrison Ford and Julia Ormond.

A breakthrough of sorts came when he was picked to play Jack Nicholson's gay neighbor in 1997's "As Good as It Gets," a role that earned him an Academy Award nomination.

"Truthfully, I didn't feel like I was an actor. When I got 'As Good as It Gets,' I felt like, 'You know what? This is something I feel passionate about,"' he says.

While Kinnear had been juggling the small screen and movies, now he felt he had to choose. NBC agreed to release him from his contract ï¿½ or, as he puts it, "cut the umbilical cord."

"It was kind of a starting point for me," he says. "I did feel like I had crossed some threshold of marginal confidence as an actor. It was a time when I could really throw myself into it."

Since then, Kinnear has been flexing more acting muscles, appearing in the dark comedies "Loser" and "Nurse Betty," the dramas "We Were Soldiers" and "Dinner with Friends" ï¿½ as well as the romantic comedies "You've Got Mail" and "Someone Like You."

"He'd been getting better and better as an actor," says Schrader. "When we began this, he was strong in an area where I was weak, which is the comedy. I needed an actor who could absolutely cover me in the shallow end. I could cover him in the deep end."

Though loath to make any comparison between himself and his latest character, Kinnear admits that his career does share the slow, consistent arc that Crane's did ï¿½ even if they traveled in opposite directions.

"In terms of my career, it's been steady work and a steady evolution for 15 years, and they've been really incremental changes," he says.

"It just has been like a slow burn, which is something I'm really grateful for. I shudder at some of those young actors or stars who just, all of a sudden, have that mega-fuel burn and blast off."

Now that Kinnear is a movie star ï¿½ "a thespian," he corrects sarcastically ï¿½ does he fear the sense of entitlement and privilege that helped corrupt Crane?

"He fell into temptation. Do I think that's about fame? No. I think temptation is an element of every person on the planet. Temptation isn't exclusive to celebrity," Kinnear says.