Nashville, Tenn. — The first time Faith Hill recorded a rock song, it was a lightweight version of Janis Joplin's "Piece of My Heart."

That was back in 1993, and the small-town girl from Star, Miss., admitted that as a die-hard Reba McEntire fan, she'd never heard Joplin's classic rock records.

What a difference the years have made.

"I don't know if it's risky or not," she says. "I hope my fans like it, but I'm sure there will be those who question it."

On the new album, Hill becomes a one-woman En Vogue on a song written by Pink, "If You're Gonna Fly Away." She tries a dramatic recitation on "Beautiful," a Motown groove on "Unsaveable" and edges into Barbra Streisand territory on "One." A plan to have Aerosmith lead singer Steven Tyler sing on the title track didn't work out.

"It came very, very close, and it didn't happen," Hill says with disappointment, talking by cell phone from Los Angeles while being driven from a TV taping to a photo shoot. She was in New York last weekend for an appearance on "Saturday Night Live," and her own special airs on NBC Nov. 28.

Where she once naively chirped about being a "Wild One," Hill now sings with authority about being "Free," backed by percolating R&B rhythms and electronic effects.

"My fans have actually seen that side of me many, many times in concert. I've just never captured it on record like I have now," she says.

"It's just growth. It might sell 200,000 or it might sell 8 million. It would be heartbreaking if not as many people got to hear it, but I would still be very, very proud of it."

Odds are Hill won't be nursing a broken heart this time around. "Cry" is expected to be one of the year's top selling albums. 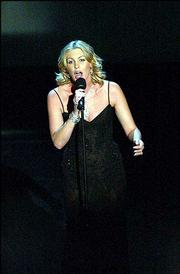 Hill has already sold more than 25 million records, including 8 million of "Breathe," which won best country album in 2001 ï¿½ one of three Grammys for Hill that year.

She crossed over to the pop charts with hits like "This Kiss" and "The Way You Love Me," and the new material ventures further, away from wholesome pop for a more urban sound.

"I don't think the consumer cares" how Hill's music is labeled, said Jim Ed Norman, president of her label, Warner Bros. Nashville. "It's going to appeal to them or not."

"If you're a purist, you were already upset about her," he said.

"I don't think it's a given that she's going to be a huge pop star, but it's certainly what they're going for."

Return to her roots

"Most of my fans know where the root of my music started, and that's the church," she said. "I have a very very strong, heavy gospel and R&B foundation. ... I just never have been able to find the songs that have allowed me to be free with it."

Growing up, Hill was in a choir that sang at Baptist and Pentecostal churches. To encourage her, her mother would give her 25 cents to sing at family get-togethers. By 19, she decided to move to Nashville to try her luck as a singer.

One of Hill's early jobs there was packaging fan merchandise for McEntire and selling T-shirts at the annual country music Fan Fair.

After six years in Nashville, she scored her first record deal, with Warner Bros., and her first single ï¿½ "Wild One" ï¿½ went to No. 1. She shifted to a more pop sound and scored more hits with "This Kiss" and "Breathe."

She also has recorded duets with husband Tim McGraw, whom she met on tour and married in 1996. (She and first husband Dan Hill divorced in 1994.) The couple lives outside of Nashville, and Hill has spent the past couple of years largely out of the public eye. She gave birth to their third daughter, Audrey Caroline, in December.

"I've been having a regular life," Hill says. "Not being in front of a camera every day was definitely a change for me. I was working on this album the whole time, just at a less frantic pace than usual. Just having the time to really work on it made a big difference."

To promote the album, Hill is traveling to Europe, Australia and Japan, as well as around the United States over the next month. Most of the time, her girls go with her.

"The suitcases are larger and more plentiful," the singer says. "Anybody who knows traveling with kids, it's just hilarious, the things that you have to take. ... You don't know what you'll be able to walk around the corner and grab. It's like a traveling circus."