Jam Master Jay shot in the head at his recording studio; police have no suspects

New York — Jam Master Jay, a legendary figure from the early days of rap music, was shot in the head and killed Wednesday night inside his recording studio in Queens, police said.

The founding member of the platinum-selling group Run-DMC was gunned down by two men who were buzzed into the second-floor studio around 7:30 p.m., police said.

A 25-year-old man, whose name was not released, was shot and wounded by the attackers, who fled. Two women who were making a recording in the studio were not hurt, cops said.

Police said they had no motive for the slaying, which took place near the Jamaica bus terminal ï¿½ a mile from the 37-year-old rapper's childhood stomping grounds in Hollis.

"I can't believe this," said lifelong friend Garfield McDonald, 35. "Everybody loved Jay. He didn't bother anybody."

Dozens of rap promoters, musicians and friends exchanged hugs in the rain outside the studio where Jay, whose real name was Jason Mizell, was killed.

His 15-year-son, Jason, arrived in tears along with his mother, who took comfort in the arms of Lyor Cohen, a rap executive who gave Run-DMC one of its first big breaks.

"I'm trying to tell myself this isn't true," Cohen said. 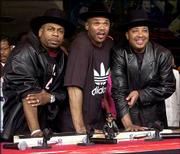 The killing was just the latest blow to the hip hop community, which has seen some of its biggest stars ï¿½ such as Tupac Shakur and Biggie Smalls ï¿½ die violently.

Mizell, who worked as a producer, burst onto the rap scene in the early '80s when he founded Run-DMC with Hollis pals Joseph (Run) Simmons and Darryl (DMC) McDaniels.

Their manager was Russell Simmons, Joseph's brother, who went on to become a millionaire rap mogul and activist.

"Jay was a wonderful person," said Cory Robbins, who signed Run-DMC to their first recording contract in 1983. "You won't hear anyone in the industry who has anything bad to say about him. This is a terrible loss."

Known for its hard-driving style that mixed elements of heavy-metal rock, the band was the first rap group to earn a platinum-selling record, for its 1985 release "Raising Hell."

The leather-clad group broke into the mainstream with crossover hits "It's Like That," "Sucker MC's," and "Walk This Way," a number with Aerosmith's Steve Tyler that made the top 10 on the pop charts.

Mizell was the group's disc jockey and created the stripped-down beats and rhythms that formed the musical foundation for their songs.

He was known for scratching records as his two partners rapped ï¿½ a groundbreaking role that the group lionized in song: "He's the one in charge/It's up to him to rock beats that are truly large."

The group's career fizzled in the late '80s, eclipsed by other acts like LL Cool J and Public Enemy.

After a hiatus of 13 years, Run-DMC tried to mount a comeback last year, but its album, "Crown Royal," flopped.

Despite the failure, the group insisted it was not washed up. "We're the Rolling Stones of hip hop," McDaniels bragged last year.

He offered six-week courses aiming to teach up-and-coming deejays the history of rap and the techniques needed to keep crowds moving and rappers happy.