Los Angeles — On Wednesday, Justin Guarini or Kelly Clarkson will be anointed an "American Idol" by television viewers. The winner's first single will be out in less than two weeks, the first album two months after that.

That's the certainty awaiting the finalists in Fox's hit talent competition, which started out with 10,000 aspiring pop stars hoping for a TV magic-carpet ride to fame. 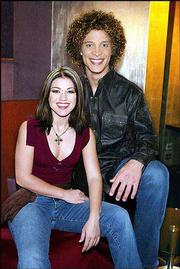 Finalists Kelly Clarkson and Justin Guarini will face off today and Wednesday in "American Idol: The Search for a Superstar." The winner of the talent competition, chosen by viewers, will have a single out in two weeks and an album within two months.

After that? Get out the crystal ball. The top contestants have a shot at lasting careers if hard work, artistic growth and a sometimes-fickle public fall into line, say music industry insiders.

For now, even the show's co-executive producer admits the idol title is in name only for Guarini, 23, of Doylestown, Pa., or Clarkson, 20, of Burleson, Tex.

"This program or programs like it are great platforms for a career, but they don't guarantee any career," said Nigel Lythgoe. "Their music, at the end of the day, and where they take their music and the quality of their songs is going to do that."

"You really can't bet on how someone's going to fare until a record is made and it hits the stores," said Mayfield, director of charts for Billboard. Since artist development is "a gamble and risk anyway," he said, the contestants' chances are as good as any.

Independent producer 7 Aurelius, who has worked with stars including Mary J. Blige, Janet Jackson and Jennifer Lopez, expressed confidence that the show's best would find success.

"It already worked overseas," Aurelius said, referring to the hit records produced by the three top finishers in Britain's "Pop Idol," the model for "American Idol."

He pronounced himself ready to work with Nikki McKibbin, 23, of Grand Prairie, Tex. who just missed out on the finals. ("I want to sign her. Print that," Aurelius said.)

"American Idol" contestants seem to have a ready-made market. The series started out with a healthy summer audience of 11.5 million when it debuted June 11; viewership swelled to nearly 17 million last week as the contestants were pared to the final two.

Fox crows it has the highest-rated summer series among the young adult viewers favored by advertisers.

The number of callers voting for their favorite has swelled to more than 14 million weekly. That includes, however, "power dialers" making thousands of calls in a bid to change the voting outcome ï¿½ which the producers maintain has had a statistically insignificant impact.

"We get to pick the winner," 15-year-old fan Ashley Knoblach said, explaining the show's appeal as she and several friends waited to take their seats at a taping last week in Hollywood's Kodak Theatre. Will they buy their records? Yes, they nod in enthusiastic unison.

The two-part finale airs today (8-9 p.m. CDT) and Wednesday (7-9 p.m. CDT). Guarini and Clarkson will perform the first night and votes will be cast; the results will be announced the second night.

There's no cutthroat gamesmanship, at least none apparent, between the finalists. "This show, I'm going to be completely relaxed," Clarkson said in an interview. "Whoever wins, wins."

Predicted Guarini: "It's gonna be a lot of fun."