The Russian space agency Rosaviakosmos ordered the 23-year-old pop star to leave Russia's Star City cosmonaut training ground, where he had been since July, after missing several deadlines to pay for his October ride to the International Space Station. 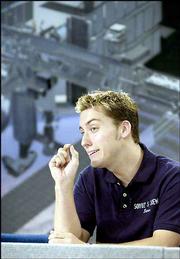 'N Sync singer Lance Bass faces slimmer chances of making a trip into space. On Tuesday, Bass was asked to leave Russia's cosmonaut training program because his sponsors didn't come up with the $20 million for a trip to the International Space Station.

Russian space officials negotiated with Bass "in good faith," but "his sponsors didn't fulfill the conditions of the contract and we never received the money," Gorbunov said, adding that the trip was now an "impossibility."

Bass will be replaced on the ride by a container packed with space-station supplies weighing about the same as him.

However, Bass' publicist in New York disputed the Russian announcement, saying, "The trip is not over."

"We are still in negotiations," Jill Fritzo said. "We feel very confident that there will be a resolution soon and the trip will go on as planned."

The Los Angeles television producer behind the bid dismissed the Russian announcement as a negotiating ploy.

"The truth is that we simply need to finalize the delivery of the funds so that everyone is comfortable and he'll be back in the saddle again," said David Krieff, who plans a series about Bass' trip and is gathering sponsors.

Krieff expected Bass to be back on the crew list by week's end.

The Russians agreed to several deadline extensions because Bass' name had been forwarded to their space-station partners, who endorsed the singer last week, Gorbunov said. Also, a short amount of time remained for training, making it impossible to begin work with another candidate, he said.

Bass' supporters blame paperwork problems for the payment delay and insisted he still hopes to make the trip.

Bass, who attended a U.S. space camp in Florida 10 years ago, would have been the youngest person ever in space if he went on his trip.

Bass returned on Sunday to Russia's Star City after spending a week at NASA's Johnson Space Center in Houston with the other two crew members for the Oct. 28 flight aboard a Russian Soyuz rocket ï¿½ Russian cosmonaut Sergei Zaletin and Belgian astronaut Frank de Winne.

"He impressed everyone with his sincerity and his intelligence," said Oberg, a paid consultant on a separate bid to film a television production from space.