Heart of the 'City'

While the producers of the true-life cop drama (which opens in area theaters today) have no problem capitalizing on the Oscar talents of its cast, the actors themselves are quick to downplay the titles. 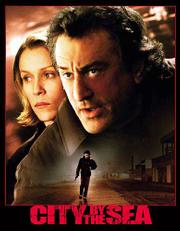 "I've always felt that my name is long enough," laughed McDormand. "But it's nice, c'mon. I've been working for 20 years, and it's great when people, your peers, go 'Yes. Good job. Watched that. Thought that stood out from that.' That whole part of it is very gratifying. The parenthetical statements, this is the purpose for them (points to film poster)."

The responses are typical of the pair, interviewed together a few weeks ago at a press conference in New York's Drake Hotel while promoting "City by the Sea."

Although both seem in a good mood and genuinely pleased with the result of their first collaboration, the two couldn't be more dissimilar. McDormand is witty, vibrant and given to long analysis in her answers. De Niro is passive and short on elaboration. His thought process seems to stall whenever he dissects an approach to acting ... or most anything for that matter.

That's all the more ironic given the nature of their interaction in the film, in which he plays a cop and she his girlfriend. When the cameras rolled, De Niro welcomed long takes of improvisation. McDormand was at first speechless without the crutch of a script.

"He's a master of it, and I'm really bad at it," McDormand said of their improvisational bouts. "There's some heavy monologues, like major technical stuff that Bob had to have down ... But it was interesting that the dialogue went back and forth faster when we had improvisation. It was real exciting for me, because I'm ... more of a stick-to-the-script (person)."

Despite De Niro's penchant for impromptu moments, it was the words on the page that drew him to "City by the Sea" in the first place.

"The reality part of it made it more interesting," he said. "But what I was taken by was the script. Because no matter who you do a story about ï¿½ it could be about Christ ï¿½ if the script at the end of the day is not there, then there's nothing."

Given that mindset, it wasn't surprising that De Niro neglected to introduce himself to the man his character is based on ï¿½ former NYPD detective Vincent LaMarca ï¿½ until the movie was completed. Although it's a decision he now regrets.

"I just don't know why I didn't see him or meet him, because of course I always want to meet the person," De Niro explained. "In this case, I don't know, maybe I felt I was very satisfied with the script. But there's always a benefit to meeting (the subject) ... I always feel that you can't lose in that situation."

McDormand didn't have that dilemma, because her character was a Hollywood fabrication. In the movie, McDormand plays Michelle, the downstairs neighbor of LaMarca. The two have been carrying on a casual romantic relationship despite the fact that she knows very little about him.

"It is 'the girlfriend' role," said McDormand, who was happy to NOT be cast as another no-nonsense mom (as with her Oscar-nominated turn in "Almost Famous"). "It's a classic character in movies, to a certain extent these days. There is that woman of the male protagonist that gives you a glimpse into some part of his private life that you might not know that much about."

As the plot progresses, LaMarca reveals to Michelle a chain of violence that has hounded his family (the film's working title was "Mark of a Murderer"). First, his father was executed after a botched kidnapping/ransom scheme ended in the death of an infant. And while LaMarca himself turned to a career in policework instead of crime, his own son, Joey (James Franco), is not so lucky. He has just been accused of committing a homicide.

"(LaMarca) was a cop, but it was also a guy you could empathize with and sympathize with," De Niro said. "So he was a cop ... but it's not the essence of it. THAT was what happened between the father and son, and the father not being there, and giving up at one point and forced to go back to what he does do: facing it and supporting his son."

For De Niro and McDormand, who have numerous lengthy scenes together, the chemistry of their interaction came about almost immediately.

"It started in our first rehearsal," she recalled. "When we first all got together was kind of the basis for what the two characters are ... Bob and Michael (Caton-Jones, director) and I had a read-through. There was a scene I had some questions about. (Michael) asked me what I thought, and I told him. Then he said to Bob, 'What do you think?' And Bob said, 'I THOUGHT it was fine until Fran got here.'"

Next up, McDormand will star in "Laurel Canyon," the story of a free-wheeling L.A. mom (that role again!) who corrupts her straight-laced son's fiancï¿½ through her rock and roll lifestyle, while De Niro joins Billy Crystal in the comedic sequel "Analyze That." Although both actors constantly seem to be in demand, McDormand counters this assumption with advice for those still contemplating a career on the big screen.