The statement is hardly a shock, considering his fellow road warriors are currently in the midst of a months-long European/U.S. tour that concludes on Halloween in the band's home state of California.

Since forming in 1991 while merely scruffy high school students, Incubus has gone from a commonplace funk-metal outfit to one of the more ambitious rock acts to achieve radio dominance. With two multiplatinum albums to its credit that feature perennial singles such as "Nice to Know You," "Wish You Were Here" and "Drive," the five-piece has found a melodious way to put a new spin on a weathered style.

Helping matters is the incorporation of turntable expert DJ Kilmore into the mix, whose eccentric sounds help separate Incubus from the modern rock pack. And really helping matters is frontman Brandon Boyd whose distinct vocal control is matched only by his boyish good looks ï¿½ a condition that has led to his image being plastered on dozens of layouts for prominent magazines.

Songwriter and founder Einziger took time before a London gig to talk about the perils of sharing a tour bus with a girl-magnet lead singer, his one-time experience trying out for Alanis Morissette's group and why Incubus is such a dopey band name.

What's one of your personal tricks for not going insane from all the touring?

"Who says that I don't go insane from all the touring? Just knowing that I'm going to get to go home and sleep in my bed at the end of it. I mean, it's a lot of fun. It does take a lot out of you and it does wear you down, but honestly it's like ... most people have to go to work and put on a certain type of outfit and sit in a cubicle or an office all day long and type on a computer. I don't have to do any of those things. I do what I want. I get paid money to do what I would do anyway, and what I would idealistically be doing. I couldn't ask for a better life."

How annoying is it to be in a band with a singer who many worship as a sex symbol?

"It's the greatest thing in the world. There's so many hot girls at our shows it's ridiculous ... The only person who gets annoyed with it is him. Sometimes people shift the topics of conversation or emphasis from music to the way Brandon looks or dresses or how he takes his shirt off while we perform. For some reason that's become a really big deal. I have video tapes of us when we were 15 years old and him taking his shirt off and performing. He just doesn't like to wear a shirt! He gets hot and sweaty and he wants to take his shirt off. There's this notion that he does it for the purpose of riling up these young girls. That's such a manufactured, synthetic observation. That aspect of it can be annoying because it's so far from the truth."

What are some of the challenges of integrating a DJ into guitar-based compositions?

"I think it's more of a challenge personally than sonically. The possibilities are endless, so it's just a matter of personal taste. But I don't think we've explored the sonic possibilities of turntables combined with live instruments. I think we've just scratched the surface. We have a strong desire to jump into that deeper on the next record. The turntable has become like an aesthetic fixture onstage with a lot of modern rock bands, but it doesn't seem like they really do anything. Kilmore is not just a stage prop, he's doing a lot of different things ï¿½ he's something of a concert master. Like he's playing string arrangements and strange sounds and beats; he's really part of the band. I think we can take it a lot further than potentially anybody's taken it before." 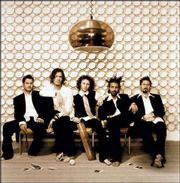 Do you have any clear-cut goals for your next record?

"Obviously to make it very different than the last one ("Morning View"), which is something we always do. We don't sit down and purposefully say, 'Okay, we need to write a different record.' But just naturally, all of us would get bored if we just started repeating ourselves. It's half conscious and half subconscious that we really decide to do something new and different for us with each record."

What do you remember about trying out for Alanis Morissette's band?

"I remember being about 17 years old ... This was before we ever got signed or went on tour or anything like that. I was something of a studio musician when I was that age. I was working at a recording studio, and I used to do sessions all the time. It was fun to play music with different people, no matter what kind of music. I just thought it was cool to have the experience of working with different musicians. I went into this room, and all the people were 10 years older than me except for Alanis ... We ran through three of her songs. I must say, I didn't like the music at all when I heard it. It was a few of the songs on 'Jagged Little Pill,' her huge, massive hit record ... I didn't know the music at all and I was just kind of (joking) around, and she was really sweet. Obviously I didn't get the part, but I remember her asking me, 'How old are you?'"

In retrospect, what do you wish you would have named your band?

"Probably something cool. Something like ï¿½ what would be a cool name for a band? 'Do it on the moon.' It's from that part in 'Revenge of the Nerds' where Betty Childs takes Louis into the little moon-bounce thing. And she's like, 'Do you want to do it on the moon?' That'd be a cool name."