Though the sell-out crowd that turned the Bottleneck in downtown Lawrence into a steam bath Friday night mainly came to hear headliner Taproot, flavor-of-the-month rap-rockers, it was supporting act Deadsy that offered something interesting and who might still be doing so six months from now.

Deadsy is the brainchild of P. Exeter Blue, sometimes known as Elijah Blue Allman, the work-product of Gregg Allman and Cher's brief '70s marriage. He wants you to call his music undercore, out of a desire to avoid tired, 70's comparisons but those comparisons are unavoidable.

While Deadsy's music doesn't draw any of its inspiration from either of P. Exeter Blue's parents' music in the least, echoes of Bowie, Blue Oyster Cult and Black Sabbath are evident to the ears.

Blessedly, Deadsy's influences do not end there. Present also are gleanings from darker '80s new wave artists like The Cure and Bauhaus, an affection for death metal and some pretty far-flung metaphysics married to a comic book sensibility evidenced by the onstage personae the band members have adopted.

The net effect is that of a post-goth, glam band hybrid without much precedent. Is it contrived? Yes. Is it interesting? Yes. Is it entertaining? For the most part, yes. 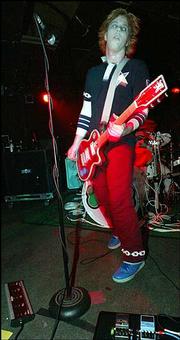 Along with Blue, keyboardist; Dr. Nner, bass player; Creature (with foaming mouth); drummer Alec Pure; and "Z-tar" player Carlton Megalodon all strike poses meant to represent the five elements of Blue's bazarro vision. They're fun to look at, and as a band their dark, heavy-yet-measured thrust is appealing in both how it sounds new and familiar at once.

Deadsy closed with a new song, "No Fear," which sounded like it could have been an outtake from "Sabbath Bloody Sabbath." Ozzy would have been proud.