Williamstown, Mass. — The images of Adolf Hitler's Third Reich forever will be linked with evil. The menace of the swastika, the perfect but intimidating columns of marching Nazi soldiers.

An exhibit at Williams College Museum of Art argues that it wasn't a study of warfare, politics and military strategy that influenced the background and symbols for Hitler's visions. It was art: Wagner's operas, the dark and simple work of German painters, Viennese architecture. 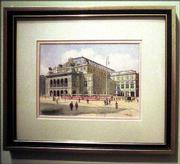 A watercolor by Adolf Hitler, "The Opera in Vienna 1910-12," is part of the "Prelude to a Nightmare: Art, Politics and Hitler's Early Years in Vienna 1906-1913" exhibit at the Williams College Museum of Art in Williamstown, Mass.

"Prelude to a Nightmare: Art, Politics, and Hitler's Early Years in Vienna 1906-1913" traces the dictator's artistic aspirations, disappointments and influences during his seven years in the Austrian city.

The exhibit uses about 275 paintings, posters and clips of film from Nazi rallies to illustrate art's influence on Hitler. Displays of anti-Semitic pamphlets that circulated around Vienna in the early 1900s show that Hitler mimicked the pamphlets for his own propaganda decades later.

Two years after visiting Vienna for the first time, Hitler moved there in 1908 as a 19-year-old aspiring artist. Twice rejected from the city's art academy, he drifted, staying in homeless shelters, attending operas and watching sessions of Parliament.

A friend encouraged him to sell his paintings ï¿½ mostly postcards and watercolors of Vienna landscapes ï¿½ some of which are displayed in the Williams exhibit. According to a memoir kept by the friend and on display at the exhibit, some of Hitler's highest-paying and most loyal customers were Jews.