Indian Arts Show judges give this year's entries a thumbs-up

Nelda Schrupp reached deep inside a large clay pot sitting on a table among other artworks entered in the 14th Annual Indian Arts Show at Kansas University's Museum of Anthropology.

Schrupp moved her fingers upward along the curves of the pot to determine the consistency of its 1/4-inch walls. She tapped the pot's side and listened to hear if it created a hum, a sign of a well-constructed work. She studied the bird and free-form images that were carved into the pot's body. 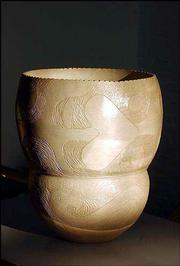 A large pot by Jane Osti of Tahlequah, Okla., won the Best of Show Award in the three-dimensional category.

Schrupp and fellow juror Benjamin Harjo Jr. agreed that the pot, by Jane Osti of Tahlequah, Okla., deserved the Best of Show award in the three-dimensional division of the show. Not only was the pot a fine example of southeastern pottery making, but it also echoed the future of American Indian arts by blending traditional craftsmanship and contemporary design.

"I see a good majority of (young American Indian artists) tied to the traditional arts and trying to keep them alive and vibrant," said Schrupp, a Lakota, N.D., artist who recently ran a pilot program in American Indian arts at the University of North Dakota. "There's an equal number of students who are using contemporary materials and pushing the art in a new direction."

One of those artists is Amada M. Pena of Santa Fe, N.M., whose oil and colored pencil painting received the Best of Show award in the two-dimensional category. The painting, done in vivid hues of red, depicts four views of Yaqui deer dancers.

"The red plays into the significance of the life and energy of the deer dancers," said Harjo, an Oklahoma City painter and printmaker whose works are in the Gilcrest Museum in Tulsa and Heard museums in Phoenix. "(This was selected) because of the expertise of the artist and the quality and look of the painting."

"I like the way he juxtaposed the deer dancers and the florals," she said. "The color combinations are strikingly vivid and strong. There's lots of emotion."

Schrupp and Harjo said they were impressed with the quality of entries in the Lawrence Indian Arts show.

"This show has good quality work from several different areas of the United States," Harjo said. "The show has a good reputation, and it's growing as far as attendance."

Maria Martin, who has organized the Indian Arts Show since its inception, said 102 works were entered in the adult category while the youth category drew 10 entries. Last year, the show had about 155 entries, including paintings, sculpture, jewelry, pottery, beadwork, quillwork and clothing.

The decline in entries may, in part, be due to an announcement by KU officials in June that the Museum of Anthropology would close to the public this fall.

"A number of artists thought the museum had closed the day of the announcement," Martin said, adding that she made an extra effort to let the artists know the Indian Arts Show was continuing.

The Indian Arts Show, which opens Friday night at the museum, and the Haskell Indian Art Market, on Saturday and Sunday at Haskell Indian Nations University, attract about 40,000 people, according to Martin.

At this year's market, more than 165 artists are expected to display and sell traditional and nontraditional art, such as beadwork, pottery, jewelry, sculpture, paintings, textiles, drawings and quillwork. Most of the artists are from Oklahoma, Arizona and New Mexico.

The arts show and the market bring together segments of the Lawrence community.

"It ties the two universities and the community together," Martin said. "It brings the cultures together and helps promote the understanding of those cultures through the arts. ï¿½ The artists believe in what we're doing and put their art behind it."

A new home on the horizon

This is the last year for the Indian Arts Show to be hanged in Spooner Hall, where the anthropology museum is housed, and a future site is yet to be determined. Martin said the show's participants and supporters and KU officials have told her they would continue to back the show regardless of where it is.

"It's a bittersweet feeling. ï¿½ It's disappointing that it has to happen, to lose a public museum, " Martin said. " ï¿½ Sometimes with change comes a new energy. The show could take on a whole new life. It could be very exciting."