Robert Mirabal and his performance ensemble RareTribalMob will bring their "Music From a Painted Cave" tour to the Lied Center. The concert will be at 7:30 p.m. Saturday.

Mirabal is one of the leaders of the American Indian music renaissance. His style is less commercial than many of his contemporaries. He builds his melodies on the rituals that have surrounded him at the Taos Pueblo in New Mexico, where he was born and still resides. As a performer, songwriter, flutist, vocalist and drummer, he uses traditional music, instruments and dance with their modern counterparts. 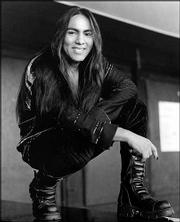 Robert Mirabal and his performance ensemble RareTribalMob will perform "Music From a Painted Cave" at 7:30 p.m. Saturday at the Lied Center.

Mirabal has recorded flute albums for several music labels, including Warner Western and Silver Wave Records. His concerts have taken him to Europe, North America, Russia and Japan. He has studied Japanese Taiko drumming, rhythms from West Africa and Haiti and Celtic music. He also has immersed himself in rock, blues and hip hop.

All of these influences can be seen in "Music from a Painted Cave," his first large-scale multimedia production and new CD. The band's instrumentation includes cello, electric guitar, aboriginal didgeridoo and two percussionists. The ensemble also includes singers and dancers in costumes. Special lighting effects create the illusion of a petroglyph-filled cavern wherein the performance, or ceremony, takes place.

The show is enhanced by segments filmed at Taos Pueblo, with black-and-white stills showing everyday life on the reservation and from the early days of movie-making.

While in Lawrence, Mirabal and Haskell Indian Nations University graduate Patrick Shendo will participate in a Meet-the-Artists discussion for Haskell students at 11 a.m. Saturday in Roe Cloud Residence Hall at Haskell University.