Philadelphia — No shrinking violet, Rebekah Revels smiled patiently for photographers as she adorned her plum pants suit with a $19,200 pearl-and-diamond necklace at Tiffany's on Saturday.

Revels, 24, who is suing to regain the title of Miss North Carolina amid reports of topless photos, joined 51 other Miss America contestants ï¿½ including the runner-up named to replace her ï¿½ at the morning photo opportunity. 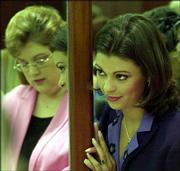 Miss North Carolina Rebekah Revels attends a "Breakfast at Tiffany's" event in Philadelphia. Miss North Carolina runner-up Misty Dawn Clymer, 24, also attended the Miss America event Saturday. Revels and Clymer both will represent the state at the pageant until a court resolves which one should carry the title, organizers said Friday. Revels is suing to rescind her resignation tendered after the pageant learned of photos in which she appeared topless.

Neither she nor her successor, 24-year-old Misty Dawn Clymer, spoke to reporters. The two women mingled with other contestants and their chaperones but did not make a joint appearance.

The current Miss America blamed the situation on Revels' ex-boyfriend, who allegedly took the photos and threatened to distribute them.

"It is unfortunate that this young man held this against Rebekah," Miss America Katie Harman said Saturday, as the contestants tried on baubles at the famed jewelry store.

Pageant officials say they'll recognize both women until the courts decide whether Revels willingly resigned. A federal judge said he may not rule before the Sept. 21 nationally televised contest.

In true pageant style, Harman found a silver lining in the squabble.

"It's awkward, but it prepares these young women for the job of being Miss America. We face the media, we face situations like this quite often," Harman said.

During Harman's reign, her parents complained that pageant officials weren't treating her well.

The current flap comes after a tumultuous year for Miss America.

Last December, pageant officials threatened to move Miss America out of Atlantic City, N.J. A compromise was struck between the pageant and the state, forestalling the possibility of a move.

Then came the complaints from Harman's parents and the resignation of then-CEO Robert M. Renneisen Jr., who later filed a lawsuit against the pageant.

In doing so, he became the second former Miss America CEO to take the pageant to court; Robert L. Beck, fired after suggesting that Miss America be open to women who'd had failed marriages or abortions, is still waiting for his suit to get to trial.