St. Louis — Christopher Reeve has regained some movement and sensation in his hands and feet, seven years after a horse-riding accident that left him paralyzed from the neck down, one of his doctors said Tuesday.

The "Superman" star also can breathe on his own for about an hour at a time, said Dr. John McDonald, a Washington University neurologist who has been treating Reeve. 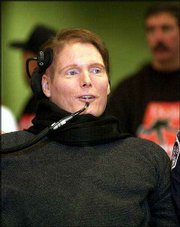 Actor Christopher Reeve has defied scientific expectations by regaining some sensitivity from the neck down.

McDonald said the actor's progress should illustrate that "improvements are possible, and that's what we should be aiming at."

He cautioned against false hope.

"Where (the recovery) will end we also don't know," he said. "Nobody can tell if Christopher or anyone (with such an injury) will walk."

Reeve had hoped to walk by his 50th birthday, Sept. 25. But just to gain sensation is an accomplishment, he told People magazine for its Sept. 23 issue.

"To be able to feel just the lightest touch is really a gift," he said. "The fact is that even if your body doesn't work the way it used to, the heart and the mind and the spirit are not diminished. It's as simple as that."

McDonald, medical director of the Spinal Cord Injury Program at the Washington University School of Medicine in St. Louis, has directed Reeve in a home therapy program that uses electrical muscle stimulation and repetitive motion exercises.

Since beginning McDonald's program, Reeve can move his right wrist, the fingers on his left hand and his toes. He can feel a pinprick on most parts of his body and can tell the difference between sharp and dull.

Reeve documents his progress in a new book, "Nothing Is Impossible: Reflections on a New Life," and in an ABC program that will air Sept. 18.

McDonald said Reeve's advances defied previous scientific expectations, when experts predicted that he would never be able to feel or move from the neck down.

Reeve exercises an average of three hours a week on a special computerized bicycle that sends electrical messages to his legs.

The activity helps build muscle mass and bone density, and McDonald hopes it will encourage spinal cord cells to "remember" what it's like to be involved in leg movements.