New York — Kim Hunter, who won a supporting Oscar in 1951 as the long-suffering Stella in "A Streetcar Named Desire" and appeared in three "Planet of the Apes" movies, died Wednesday. She was 79. 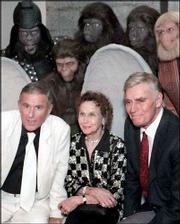 Actors Roddy McDowall, left, Kim Hunter and Charlton Heston, original cast members of the 1968 "Planet of the Apes" movie, pose with ape-costumed characters during a 30-year film anniversary and re-release reunion event in this file photo from Aug. 27, 1998. Hunter, who won a supporting Oscar in 1951 as Stella in "A Streetcar Named Desire" and appeared in three "Planet of the Apes" movies, died Wednesday in New York. She was 79.

The actress enjoyed a long and busy career in theater, but less in films, partly because she was blacklisted during the red-hunting 1950s.

"Kim Hunter was a fine actress and a wonderful person," said actor Charlton Heston, who co-starred in "Planet of the Apes." "The world has lost a unique talent."

"A Streetcar Named Desire" was the highlight of Hunter's career. The play was cast with Marlon Brando as Stanley Kowalski, Karl Malden as Mitch, and Jessica Tandy as the tragic Blanche DuBois.

Director Elia Kazan admitted in his autobiography, "A Life," that he had trouble casting Stella "because I enjoy looking at girls."

He added of Hunter: "The minute I saw her I was attracted to her, which is the best possible reaction when casting young women."

Brando, Malden and Hunter played their roles in the somewhat sanitized film version. Hunter, Malden and Vivien Leigh, as Blanche, won Academy Awards; despite his unforgettable performance, Brando did not.

Hunter told the New Orleans Times-Picayune in 1999 that after she left "Streetcar" she tried to avoid seeing the play with other casts.

"It's simply that I have no objectivity about it," she said. "It was so much a part of my life, it would be unfair to the productions and performers."

Her screen career entered a lull in the late '50s, after Hunter, a liberal Democrat, was listed as a communist sympathizer by Red Channels, a red-hunting pamphlet that influenced hiring by studios and TV networks.

She returned to film in "Lilith" (1964), which starred Warren Beatty, Jean Seberg and Peter Fonda. Four years later came "Planet of the Apes."

Hunter was cast as Dr. Zira, a chimpanzee psychiatrist in the science fiction classic. Applying and removing the makeup and monkey suit took hours.

"It was pretty claustrophobic and painful to a certain extent," she said in a 1998 interview.

After the "Planet of the Apes" movies, Hunter appeared on Broadway in "Darkness at Noon," "The Children's Hour" and "The Tender Trap."

Her television appearances included the soap operas "The Edge of Night" and "As the World Turns."

Hunter was born Janet Cole in Detroit on Nov. 12, 1922. When she obtained a contract with David O. Selznick, his first move was to change her name. Hunter was married to William Baldwin in 1944; they had a daughter, Kathryn, and divorced in 1946. In 1951, she married actor and producer Robert Emmett, with whom she sometimes costarred in plays. Their son was named Sean Robert.