Los Angeles — "Frasier" is in an Emmy class by itself.

The NBC comedy, breaking a record held by "The Mary Tyler Moore Show," became Emmy's most-honored show when it received three creative arts awards Saturday in a precursor to the Sept. 22 main event. 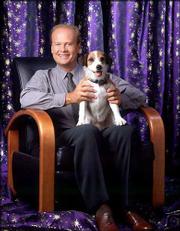 The trophies pushed "Frasier's" total since 1994 to 30, one more than the 29 garnered by Moore's comedy during its 1970-77 run. Other awards are possible for stars Kelsey Grammer and David Hyde Pierce in the upcoming ceremony.

Powered by "Six Feet Under," HBO captured the most awards, 16, followed by NBC with 15. ABC and Fox each received five trophies, while CBS received four.

Winners in the creative arts categories for the Academy of Television Arts & Sciences 54th annual primetime Emmy Awards are honored for technical and artistic achievement. Awards for acting, directing and writing will be presented in the main ceremony airing Sept. 22 on NBC. Highlights of the creative arts ceremony will be shown on E! Entertainment Television on Sept. 21.