Woodstock moves up in reel world

Woodstock, N.Y. — Woodstock is ready for its close-up, again.

The third annual Woodstock Film Festival kicks off today. Like the town hosting it, the five-day festival figures to be artsy and left-of-center with a distinct New York City accent. 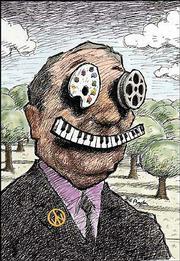 This artwork by artist Bill Plympton is the logo of the third annual Woostock Film Festival in Woodstock, N.Y. The festival opens today and runs through Sunday.

If the Sundance Film Festival conjures up an image of founder Robert Redford, the Woodstock festival's image is closer to one on its Web site showing board member Ethan Hawke in a black T-shirt.

Woodstock is a regional festival, not as big and powerful as showcases like Sundance and Toronto. But Matthew Ross, senior editor at indieWIRE, said the festival is raising its profile and status. Woodstock has a leg up on other regional festivals, Ross noted, because it caters to the film community in New York City, about 90 miles south.

"It will always be a bit higher on the radar than some of the other good regional festivals simply because of the people it can attract," Ross said.

Actor/director Tim Robbins and Parker Posey ï¿½ called an Indie Queen for playing so many idiosyncratic characters in independent films ï¿½ are among big names slated to show up. And since it's Woodstock, a guy from Phish and Arlo Guthrie are on the schedule, too.

The festival, which runs through Sunday, landed two films that created a buzz in top-rung festivals: "Personal Velocity," which took top dramatic honors at Sundance, and "Far From Heaven," which earned Julianne Moore best-actress honors this month at the Venice Film Festival.

Many movie people have full-time or weekend homes near Woodstock in the Hudson Valley. Ismail Merchant of the Merchant-Ivory moviemaking partnership needs only to drive across the Hudson River, organizers say. Festival director Meira Blaustein said an advisory board member with a house in the area helped land Robbins, who is receiving the festival's Maverick Award.

"There's much less than six degrees of separation. That has a lot to do with a lot of programming in the festival," she said.

The Woodstock festival drew about 5,000 people last year, though there were a lot of no-shows because it started the week after the Sept. 11 attacks. Blaustein expects at least that many people this year.

She said she is trying to build on what this venerable arts colony already has ï¿½ an artistic sensibility and a lot of residents involved in music and the media.

Woodstock became an arts colony a century ago and its countercultural credentials were revived with the 1969 Woodstock festival, which was actually held 50 miles away in Bethel.

That sort of sensibility is reflected in festival fare like Gus Van Sant's feature "Gerry," and "The Agronomist," a documentary in progress by Jonathan Demme about a slain Haitian journalist and human rights activist.

And it wouldn't be a Woodstock festival without some music.

Arlo Guthrie leads an opening day panel on "The Art of Dissent." Mike Gordon of Phish will put on a show with Government Mule. Screenings include The Band's farewell documentary "The Last Waltz" and "Schmelvis," a documentary detailing a search for Elvis' Jewish roots.