"I'm based in L.A., but I haven't been in my own bed for like a year and a half," said actor Heath Ledger. "I've been everywhere but."

It's been a frenzied ride for the 23-year-old native of Perth, Australia. Since coming to the attention of American audiences in "10 Things I Hate About You" three years ago, Ledger has made six films. The locations have ranged from overseas points such as Italy and the Czech Republic to American spots such as Louisiana and South Carolina. 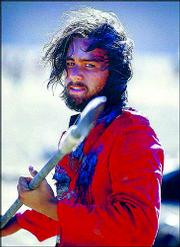 Not a one was shot in Los Angeles.

Ledger's latest filming foray, an updating of the classic yarn "The Four Feathers," whisked him to Morocco.

The nation doubles for 1875 Sudan in this tale of imperialist British soldiers preparing to march off and quell an uprising by a powerful Muslim warlord. Ledger plays Harry Faversham, a promising officer who instead decides to resign because of his upcoming marriage to Ethne (Kate Hudson). When friends and family brand him a coward (signified by sending him chicken feathers), he makes a fearless trek on his own to the war-torn African nation to win back his honor.

"I wouldn't say that I just hunt out a role because it's heroic," said Ledger, interviewed at a press roundtable last month in New York. "The thing I love about this guy is that he does heroic acts and becomes a hero or whatever, but he does it through vulnerability."

Ledger, who's appeared in gallant high-profile roles such as "A Knight's Tale" and "The Patriot," said he can often relate to the self-doubt of his characters more readily than their courageousness.

"Particularly going into projects (I'm) like wanting to get the hell out," he claimed. "I'm in the hotel room banging my head on the wall like, 'Why did they cast me? I can't do this.' It seems to be a process where you build up this immunity and strength to say, 'I can.' That's part of facing your fears and creating challenges in life."

Heath Ledger shares a dance with Kate Hudson in a scene from "The Four Feathers."

So was director Shekhar Kapur ("Elizabeth") ever tempted to give a feather to Ledger?

"He almost did during the audition process," Ledger laughed. "I kept thinking, 'God, he'll probably send me a feather.'"

Kapur recalled being especially hard on the young actor.

"It was pretty demanding, because he went through an 8-hour audition," Kapur said of the star. "The basic thing I needed to know ï¿½ because essentially to me this film is about the journey of one man from naivetï¿½ to maturity, from weakness to strength, but mostly from being immature to being wise ï¿½ how does a 22-year-old know about being wise? That's why I just grilled him. I made him do things to understand whether he understood wisdom ... Because you can't PLAY wise, you have to BE wise."

The Indian-born director finally found the answer to his examination in a place far removed from the battlefield: the bedroom.

"For the final scene, I made Heath do a love scene with the girl," Kapur remembered. "Then I said, 'Now sit in the same position, say exactly the same lines, but now you have wisdom' ... When he did that, I knew I had my (leading man)."

The hefty-budgeted production began filming in the deserts and mountains of Morocco in 2000. When he wasn't being bombarded by sand storms and flash floods, Ledger was wrestling with the responsibility of being the focal point of such an immense enterprise.

"I don't let that intimidate me," he said. "There's too much on my plate to worry about than to sit back and let that get to me. You need a clear head. Also, when you're working on a project like that, you've got all these amazing actors and characters around you. It doesn't seem that it's centering around you until you see the movie ... There's 300 people on the set, not one."

Among the crew members with whom Ledger became most intimately familiar were those in the makeup department. The boyish-faced actor sported a grizzled beard for the duration of the picture, and he needed a little help to achieve the effect.

"It would have taken me 10 years to grow a beard that long," laughed Ledger, who currently sports a shaved head. "(And) because we're cutting from this part of the story to that in half a day, it's really hard to pop it out right there."

Ledger endured three hours in the makeup chair each day to perfect the hirsute, sunburned look.

"It was disgustingly uncomfortable, because your face is covered in glue," he said. "Your smile is restricted to (shows forced expression) this stupid little grin on your face. The sand gets in on the glue, and they're constantly scraping sand out and pressing it down. I get shivers right now thinking of it."

Because so much of the filming focused on Ledger, the star couldn't spend much time away from the set. Consequently, his term in Morocco was hardly a vacation.

"I didn't get to DO anything," he said. "I didn't get to see anything outside of our locations. But on our time off I played drums with a Sudanese drum band every Tuesday and Wednesday night. We'd get wildly drunk, smash red wine all over and play drums for three hours straight around this core in the middle of the desert. It was wicked."

When production wrapped in Africa, the entire team moved to England to shoot at the requisite castles, palaces and manors from the period. It was only then that Ledger got to work with his on-screen love interest Kate Hudson.

"It must have been a little awkward for her turning up on set, because we had just spent four months in the desert all working and forming this tight-knitted family," he said. "Then she turned up the last three months in London and was kind of like the new kid on the block. She just had a lot of confidence and smiles and good energy. She had a really fresh approach to the movie, which we were dying for; we were kind of like 'Apocalypse Now' by that time."

Next up for Ledger is "The Kelly Gang," in which he plays the infamous bandit Ned Kelly. The criminal is revered as a mythical figure in his native Australia like Jesse James is in the states.

"I guess you could say Ned Kelly was a dream role," he said when discussing his cinematic goals. "But there's nothing I'm sitting around waiting for ... I'd love to do a musical."

He probably already knows the lyrics of "Road to Morocco."