Portland, Maine — Every dog has its day, as the saying goes. But cats now have theirs as well, as they brush aside "man's best friend" to take center stage at an art auction.

Today's auction at Skinner Inc. in Boston features an accumulation of feline art from cat devotee Kaja Veilleux, and is described as the nation's first auction devoted solely to "rare cat art." The painting receiving the most attention is "My Wife's Lovers," which is expected to fetch between $450,000 and $750,000. 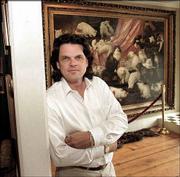 In what's described as the nation's first auction devoted solely to rare cat art, Kaja Veilleux's collection is going on the auction block today in Boston.

Skinner began putting together the auction when Veilleux decided to sell his collection of 50 paintings. Veilleux, who keeps three stray cats as pets in his home in Thomaston, Maine, said he decided to sell the art after moving to an island, where it would be difficult to show the paintings and protect them against theft.

The auction grew to incorporate contemporary pieces and objects, said Colleene Fesko, director of American and European paintings for the auction house.

Serious collectors and feline fans from as far away as England, France and Italy are participating in the auction, Fesko said.

Older cat paintings are relatively rare in the United States because the paintings were commissioned by the wealthy, Veilleux said. Today, many works are in the hands of cat lovers who do not wish to give them up.

"To get someone to part with their cat painting is damned near impossible," said Veilleux, who has been acquiring cat paintings in Maine and across the country for years.