New York — Laura Bush looked right at home as she visited a monster and a towering fowl.

The setting was "Sesame Street" (as it exists on Stage G at Kaufman Astoria Studios in New York) where the first lady paid a call Thursday morning to tape a segment. 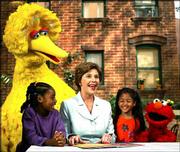 Seated at a picnic table and surrounded by giggly Elmo, Big Bird and three cute youngsters, Mrs. Bush read aloud a kids' book called "Wubba, Wubba, Woo!" ï¿½ and seemed very much like the teacher and librarian she once was.

Once she was finished reading the book, which was created especially for the segment, Mrs. Bush thanked her new friends for taking part.

Then Big Bird pleaded, "Could you read it to us again?"

Focusing on Mrs. Bush's pet cause, children's literacy, the script had been submitted to her office and approved with no changes, according to Sesame Workshop spokeswoman Ellen Lewis Gideon.

The two-minute scene will air next spring as the PBS children's show begins its 34th season.