Baltimore — Heather Whitestone McCallum, deaf since childhood, could deal with not hearing her name announced as the next Miss America in 1995.

But when one of her sons fell and scraped his head in the back yard and she couldn't hear his cry, she drew the line. 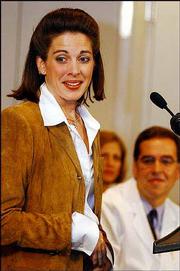 Miss America of 1995, Heather Whitestone McCallum, deaf since childhood, answers questions from the media in Baltimore. McCallum received a cochlear implant at Johns Hopkins on Aug. 7. Behind McCallum is Dr. John Niparko, the surgeon who performed the operation.

"I said 'Lord, what am I going to do? I can't stand not being there for my son when he cries and needs my help,"' said the 29-year-old McCallum.

On Aug. 7, the former Alabama beauty queen received a cochlear implant, an electronic device that improves sound quality and speech recognition with the hope of hearing her two sons, ages 2 1/2 and 15 months.

The implant procedure, performed at Johns Hopkins Hospital in Baltimore, required six weeks for healing before the device could be activated. On Thursday, doctors ushered in a whole new world of sound as they tuned the device, which was implanted in her right ear.

McCallum's audiologist, Jennifer Yeagle, clapped her hands as a test. McCallum nodded, frowned, then put a hand over her face as she began to cry.

"When I heard the clap, I just couldn't believe it," McCallum said. "I cried. It was the first sound from my right ear. It was more loud and clear than what I heard with my hearing aid."

McCallum still has not been able to hear her boys, who were with her when the implant was activated. But deciphering sounds will take time, Yeagle said.

"A lot of people expect an 'Ah-ha!' effect," said the audiologist. "It's not a fix. It doesn't repair hearing. Therapy, time and patience are my three big things."

Deaf after getting meningitis at 18 months, McCallum has used a hearing aid for years and also reads lips. So when cochlear implants were commercially marketed in the United States in the mid-1980s, she didn't think she needed one.

Being unable to hear her boys laugh, cry or even ask for something simple like a piece of toast changed her mind. The silence was an agonizing reminder that she was missing some of motherhood.

That's when she and her husband, who live in Atlanta, began researching the implants and went to Johns Hopkins, which performs 120 implants a year.

For the time being, McCallum is thrilled with the small sounds she is hearing now.

What has she heard so far?

The rustling of her makeup bag. The low thud of a car door. "Hair spray," she said, making a "shhhhhhh" sound.

In an interview Friday on ABC's "Good Morning America," McCallum said the most beautiful sound so far was that of water running into a sink Thursday night while she brushed her teeth.

"It's so gentle. It's very soft and it reminded me of my favorite role model, Helen Keller," she said.