Bloomington, Minn. — A new museum is out to debunk the idea that art from the Soviet Union was all propaganda with no enduring artistic merit by exposing Americans to artists who flourished within the Communist system.

Among those whose works will be on view when The Museum of Russian Art holds its grand opening Thursday in this Minneapolis suburb are Alexander Gerasimov, Geli Korzhev and the brothers Alexei and Sergei Tkachev. They are painters not widely known in the West but well known in Russia. 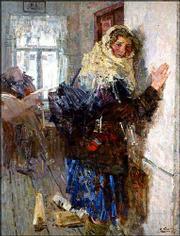 This is an undated photo of the painting "The Postgirl in Winter" by the Russian brothers Alexei and Sergei Tkachev. The work is on display at The Museum of Russian Art in Bloomington, Minn., which holds its grand opening Thursday.

Absent from the display are the stereotypical posters of Lenin and Stalin rallying the masses, or heroic soldiers marching off to defend the glorious motherland.

Instead, the collection is filled with scenes of everyday life in the Soviet era. Some paintings carry political messages, to be sure. However, there are also nonpolitical landscapes, still lifes and portraits. Many of the paintings are reminiscent of French impressionism.

In "The Postgirl in Winter" by the Tkachev brothers, who painted together on the same canvases throughout their careers, a heavily bundled letter carrier happily goes about her rounds. Nikolai Baskakov's "Milkmaids, Novella" depicts a dairymaid bantering with two co-workers.

Fedor Shapaev's "Young Pioneer at the Door" depicts a pretty little girl standing in a doorway, holding a bouquet of flowers; her red scarf shows that she's a member of the Young Pioneers, a Communist youth group. A ribbon in her hair, blue instead of red, may be a subtle bit of artistic rebellion.

The museum's founder is international art dealer Raymond E. Johnson, who has amassed what he and other experts believe is the most extensive collection of Russian realist paintings outside the former Soviet Union. He has used the collection to create one of the only museums in the United States devoted to officially sanctioned Soviet art.

When the Soviet Union began to open in the late 1980s, Johnson reasoned that since the country excelled in other arts ï¿½ ballet, music and literature ï¿½ it probably produced some great painters, too. He dispatched experts to seek out their work, and spent tens of millions of dollars acquiring it and bringing it to the United States, both for himself and other private collectors.

The core of the museum's exhibits will be about 210 works that Johnson and his wife, Susan, plan to donate from their personal collection over the next several years, said Brad Shinkle, president of the museum. For future exhibits, Shinkle said, the museum can borrow extensively from the 14,000 works the Johnsons have brought over.

"One of the biggest things that I ask for in this world is just for people to be willing to see it," Johnson said. "Whether they end up liking it or not is up to them." Admission is free.

Boris Marchuk, senior counselor in the Russian Embassy in Washington, D.C., said his country appreciates Johnson's efforts to have Americans experience some of Russia's national treasures.

"Unfortunately, there are lots of stereotypes about this type of art. ... Most people think artists worked under orders from the government, which in some cases is true," Marchuk said. "But at the same time, this period created a huge number of artists who were trained in the best schools in Russia, that have artistic traditions that go into schools of the Old Masters, 19th century and earlier. So most of them are very skillful professional artists, and the quality of their art is superb."

Johnson said Soviet artists were more skilled and had more freedom than Westerners might think.

"The schools were the greatest in the world," he said, with students spending years learning how to draw before painting. Sometimes, it took decades before they were good enough to join the official artists union. And the work they did to satisfy the government occupied only a relatively small part of their time, Johnson said.

Russian realist painting ï¿½ also commonly called socialist realist, Russian impressionist and Soviet impressionist ï¿½ was the officially sanctioned art in the Communist period. The style became popular at a time when Western artists were turning away from realism to more abstract work. And it contrasted with the nonconformist art ï¿½ works by artists who explored disfavored abstract styles or politically incorrect themes ï¿½ that largely remained underground until Soviet leader Mikhail Gorbachev introduced glasnost, an opening up of the Soviet Union.

Johnson has been a leading force in raising Western awareness of Soviet art, said Vern Swanson, author of "Soviet Impressionism" and several other art history books, and director of the Springville Museum of Art in Springville, Utah.

Swanson said he once shared the view that all Soviet art was bad. But when he finally visited the country in 1989 and saw masterpieces that were largely unknown in the West, his preconceptions were swept away. And American audiences have responded with similar enthusiasm, Swanson said.

While the Springville Museum has wonderful works of American art, everyone wants to see the Russian art, said Swanson, who has seen artists so moved that they cry when they see it.

Similarly, when The Grace Museum in Abilene, Texas, put on an exhibit of Soviet art in 1998, audiences liked the Russian impressionism, said Judy Godfrey, president and chief executive officer of the museum. The exhibit featured many items from Johnson's collection.

"There was very much an emotional draw to it," Godfrey said, citing the "lusciousness" of the big canvases and the way the artists used their paint.

Still, she said, people realized that it was art sanctioned by the Communist Party and propaganda was one of its roles. And a number of visitors, while they loved what they saw, expressed interest in seeing unofficial art. So in October, The Grace will open an exhibit that will include socialist realist works and compare and contrast them to nonconformist art from the era.

Johnson hopes The Museum of Russian Art will become a major center in the United States for scholarship on Soviet art. While there are libraries full of books on Soviet art, they're all in the former Soviet Union and the books are nearly all in Russian. So the museum plans to offer scholarships and support to art students to encourage them to write masters and doctoral theses on the subject.

It also plans to publish work in English, such as an upcoming book about the Tkachevs, to spread the word in the West.