Visitors to the "Milks and Eggs" show at the Helen Foresman Spencer Museum of Art will be offered a fuller range of N.C. Wyeth's styles and subjects in the coinciding exhibition, "N.C. Wyeth: Works from the Collection of the Brandywine River Museum." The exhibition runs through Nov. 17.

Newell Convers Wyeth (1882-1945) was the head of one of America's most famous artistic families and one of the best-known illustrators in the early decades of the 20th century. 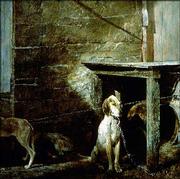 "Raccoon," by Andrew Wyeth, is pure egg tempera on gesso on a masonite panel. The painting is among those on display at the Helen Foresman Spencer Museum of Art at Kansas University.

At age 20 he moved to the Brandywine Valley of Pennsylvania to study with artist Howard Pyle. He settled in Chadds Ford and gained fame as an illustrator of literary classics.

His youngest son, Andrew Wyeth, has become one of the most influential and well-known painters in the history of American art. Andrew's son, James Wyeth, is also a well-respected painter.

N.C. Wyeth established himself among America's foremost illustrators in what is now considered the Golden Age of Illustration. His work was featured in magazines, newspapers and numerous popular books. The paintings and original art for those illustrations include works for "Kidnapped" and other Robert Louis Stevenson classics, "The Last of the Mohicans" by James Fenimore Cooper and a 1942 painting of Walden Pond.