Much of the interest already generated by "Twelve" comes from the age of the novel's precocious author.

At 18, Nick McDonell has written a book set in the privileged private-school world of New York's Upper East Side, where rich-kid wannabe hipsters experiment with drugs, sex and violence during Christmas break from school. 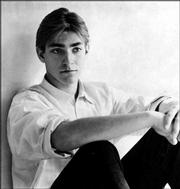 Author Nick McDonnell, 18, writes about the privileged private-school world of New York's Upper East Side in "Twelve," his first book.

The author's age and the book's subject matter will probably attract many of McDonell's peers, while hype and curiosity will draw older readers.

What they'll find is a novel much like the drug of its title: addictive.

The somewhat flimsy plot revolves around several teens who move in a circle of white, upper-class snobs and poor, black street-wise tough guys. There is a murder and a party, but they don't take on any real importance and serve only as backdrops to the characters' movements and dialogue.

The main character, White Mike, is somewhat detached, dealing drugs (while not using them) and living the life of an Ivy League snob while having a depressed restaurateur for a father. White Mike is an anomaly: He has shunned the possibility of a top-shelf education to deal drugs, but still reads Camus and Nietzsche on his own.

"So White Mike lives in his apartment, which is big and empty, with his father whom he never sees, and looks out the window at the night, and forces himself to be content," McDonell writes. "He forces himself to enjoy reading, or watching television, or preparing a meal, or doing his laundry, or spending the money he has made, or whittling a tiny bird, like he is doing now at the kitchen table with an expensive handmade pocketknife he purchased. It is a forcing."

Character development is not McDonell's forte and White Mike is the closest thing in the book to a fully developed person. But even with several flashbacks that shed light on White Mike's feelings about his mother's death, his relationship with his brother and his ambivalence toward school, White Mike never becomes more to the reader than he is to his customers: a mysterious, interesting and shadowy character who drifts in and out of their lives, never revealing much of himself or his thoughts.

Most of the book's other characters are little more than caricatures: the vacuous male model; the attractive, flirty and manipulative girl; and the two white friends who talk in hip-hop slang. McDonell relies on readers' familiarity with their types to supplement his somewhat shallow portrayals.

"Tobias has been a part-time model since getting discovered on the beach in East Hampton when he was eleven," McDonell writes in a typical character profile. "His father wants him to go to Princeton, but Tobias wants to be a full-time model after high school. No way will he get into Princeton anyway, but father keeps saying he'll take care of it. Whatever."

Such criticisms aside, "Twelve" is an exciting and interesting book, written concisely and with an uncanny feel for its subjects. McDonell makes up for his weakness in character development with an excellent ear for dialogue and just the right dose of references to fashion and pop culture, making it possible to have a character-driven book without any in-depth characterizations.

This is a fine first novel, and McDonell's tender age and abundant talent suggest we can expect more.