The Seem-To-Be Players, the resident professional children's theater company at the Lawrence Arts Center, will open its 30th season with "The Seven Voyages of Sinbad the Sailor." 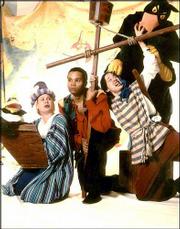 The play, written by Ric Averill, is based on "The Thousand and One Arabian Nights," a classic Persian myth, and features adventure, music, magic, monster sand mayhem as the audience follows Sinbad's journey, which reflects the seven ages of man.

Costumes are by Jennifer Glenn, with sets by Mark Reaney. Stage manager is Danny Rogevein.

After the play opens in Lawrence, it will tour North America, from Thunder Bay, Ontario, to El Centro, Calif.

"The Seven Voyages of Sinbad the Sailor" is recommended for ages 4 and older. Members of "Stars in Our Eyes," the Seem-To-Be Players' family membership program, will participate in a "hot dog theater" before the Saturday afternoon show.