The mid-20th-century American revival of the medieval technique of tempera painting is the subject of the next exhibition at the Helen Foresman Spencer Museum of Art at Kansas University.

"Milk & Eggs: The American Revival of Tempera Painting, 1930 1950" runs through Nov. 17. The show is organized by the Brandywine River Museum in Chadds Ford, Pa.

"Myself Among the Churchgoers," by Ben Shahn, egg-gum tempera on a masonite panel.

From 1930 to 1950, America experienced a resurgence of interest in craft and traditional American art. During this same era, many well-known artists in the United States participated in a renaissance of tempera painting, a popular medium for artistic expression in the 14th and 15th centuries.

Although stylistically and technically diverse, the artists shared an affinity for this ancient medium. They worked in casein tempera, where milk binds the pigment, or egg tempera ï¿½ hence the exhibition's title. 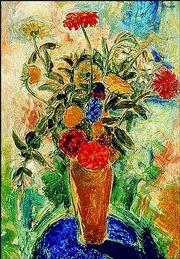 "Vase of Flowers," by Alfred Maurer, pure egg tempera or (egg-oil tempera) on paper, originally on canvas and cardboard.

Both mediums are centuries older than oil painting. The word "tempera" derives from the medieval Latin "temperare," meaning blending or mixing. Today the word indicates a medium bound with emulsions, combined with dry pigments and water.

The exhibition focuses on the art produced in the three primary centers where tempera painting was revived: Yale University School of Art, the Arts Student League of New York, and the studio of N.C. Wyeth in Chadds Ford, Pa.

It also includes information on the scientific analysis of some of the paintings in the exhibition and a video about the making of egg tempera paint.