Los Angeles — The White House drama "The West Wing" won its third consecutive Emmy as best drama series Sunday, and "Friends" was honored as best comedy for the first time in its eight years on the air.

"I'm just as surprised as you are," Aaron Sorkin, creator of "The West Wing, said in accepting the Emmy. The show also produced acting Emmy winners in Allison Janney, John Spencer and Stockard Channing. 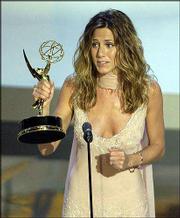 In comedy, the Emmys loved "Everybody Loved Raymond" with acting awards going to Ray Romano, Brad Garrett and Doris Roberts.

But "Friends," entering what is expected to be its final season as the most popular comedy on TV, won best series. Jennifer Aniston won best actress, the ensemble's first major acting award.

"This is so amazing, after eight years and the last three hours and 10 minutes. This is so worth the wait," said David Crane, executive producer of "Friends."

In a year when some critics thought edgy fare would win, only Michael Chiklis' best actor award for FX's "The Shield," broke the mold. HBO's undertaker drama, "Six Feet Under," earned 23 nominations but was nearly shut out, with one directing award.

Janney, who plays the president's press secretary in "The West Wing," won the best actress Emmy after winning the past two years as supporting actress in the same role.

"No way. Thank you to the Emmy voters for this promotion," Janney said.

Deadpanned Garrett: "I just hope that this award breaks down the door for Jewish people who are trying to get into show business."

Host Conan O'Brien opened the show with dubious help from rocker Ozzy Osbourne and his family, who joined in a skit in which they dressed O'Brien in outrageous Osbourne fashion and rushed him to the awards, only to mistakenly put him on the set of "The Price is Right" instead of the Shrine Auditorium.

MTV's "The Osbournes" received the best reality series Emmy at an earlier ceremony.

"Late Show with David Letterman" was honored for the fifth year in a row as outstanding variety, music or comedy series.