San Antonio ï¿½ A trial date has been set for the pro wrestling star known as ï¿½Stone Coldï¿½ Steve Austin, charged with hitting his wife earlier this year. 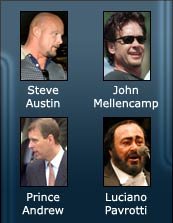 The 37-year-old from San Antonio, whose given name is Steve Williams, is facing a misdemeanor charge, assault causing bodily injury, stemming from a June 15 domestic disturbance at the coupleï¿½s home.

Austin said Friday that heï¿½s reconciled with Debra Gale Williams, his wife of two years. ï¿½Weï¿½re doing great, as a matter of fact,ï¿½ he said.

More than 23,000 people crowded onto a field Saturday southwest of Pittsburgh to raise money for small family farms.

Since 1985, when the concert series began in Champaign, Ill., Farm Aid has raised some $24 million.

Philadelphia ï¿½ Great Britainï¿½s Prince Andrew made a visit to Independence Hall, kicking off a two-day tour of the Philadelphia area.

The Duke of York made the visit to launch the Jubilee International Education Fund, a program geared toward inner-city high school students. A dinner was Sunday at the Philadelphia Museum of Art to raise money.

He said he was pleased with the strong relations the United States and Great Britain now share, 200 years after the Revolutionary War, when America fought bitterly for its independence.

ï¿½I seem to recall that it was some time ago, just over 200 years ago, that Britainï¿½s normally harmonious relations with this part of America went through a slightly sticky patch,ï¿½ he said.

Pavarotti to become a papa

The 66-year-old opera star has been living with Nicoletta Mantovani, 32, since 1996.

His spokeswoman, Renata Meroni, was asked Monday if Pavarotti, now on tour in the United States, and Mantovani planned to wed.

She replied that when Pavarotti was asked about his marriage plans, he quipped, ï¿½We always talked about getting married to have kids, and now it looks like it isnï¿½t really necessary.ï¿½