Lawrence residents have become accustomed to the sounds of music emanating from the 700 block of New Hampshire Street. Usually they hail from the nightly bands at The Bottleneck, and until recently, from the booming sound system of Tremors.

But lately another type of music can be found throughout the day at the Americana Music Academy, 745 N.H.

"Music is community," says Thom Alexander, executive director of the non-profit organization. "I want this to be the center point for American folk music in this area."

Alexander, a guitarist for nearly four decades, put his plan into action earlier this year. Gathering a host of talented instructors, the academy set up shop in downtown Lawrence. Modeled after the Old Town School of Folk Music in Chicago, the AMA offers an unusual variety of classes in private lessons or ensemble format.

While courses range from rock band to recording technology to caroling, it's the more traditional rural styles that seem to be drawing the most interest.

"All the bluegrass stuff is the most popular," Alexander says. "It's got to be passed along, otherwise it's going to disappear.

"Fortunately for us, the whole old-time music scene has really been groovin' in the last few years," Alexander adds, citing the success of the film "O Brother, Where Art Thou?" "I was always real frustrated when people would go, 'Where can I get a harmonica lesson?' Or, 'Where can I get a mandolin lesson?' I would just shrug my shoulders. Well, now we've got all of that."

But the Lawrence community hasn't embraced all the courses presented.

"It's surprising, but nobody signs up for the blues stuff," Alexander says. "And we offered a drum circle class for two sessions and never even got a phone call on it. You would have thought in this area we would have a ton of kids coming down from campus, but there was not a soul."

The academy just celebrated its grand opening this month, even though the doors have been informally open for the better part of a year. Alexander hopes its reputation will spread throughout the community. So far, things haven't quite gone according to plan.

"When we started, we had 110 students," Alexander recalls. "It's steadily decreased, but I think that has a lot to do with the economy. We have about 50 students we're teaching at the moment ï¿½ young kids and a lot of older people too ... But the weirdest thing is everybody's behind us. It's more a matter of just getting the word out and letting people know we're here."

The Americana Music Academy hopes to do that through an assortment of methods.

Plans are under way to stage a Christmas show during the holidays. The AMA intends on working closer with next year's state fiddling and picking championships. Down the line, it's even going to start the massive project of archiving bands that originated from around the area.

Bill Beningfield pays close attention to an instructor during Banjo II class on Tuesday at the Americana Music Academy.

"This school has got to be more than just giving lessons," Alexander explains. "It's got to be community outreach; it's got to be aid for the kids that need music therapy. I'm going to bring in Catfish Keith to hold a workshop on slide playing and do a concert (Oct. 11). I want to bring in those caliber people on a regular basis. Like Stan Sheldon (who played on 'Frampton Comes Alive') is one of our bass teachers, so we've given Peter Frampton a call to see if in the next year he'd want to come out."

Ultimately, however, the academy's primary draw stems from its seasoned staff of instructors.

"Although they don't teach every session, we've got about 20 instructors we can count on," he says. "And the good thing is they're all stable people. It's not a bunch of teen-agers who've been playing three years who will run off and go on tour to play some bar in Kearney, Neb."

Currently, the New Hampshire location offers five teaching rooms and a larger, centralized atrium where concerts and workshops are held. Alexander claims there can be two or three classes going on at once without any "sound cross-talk."

"It's a great location," he says. "But there's a better location that we want to get our hands on: the old Lawrence Arts Center." 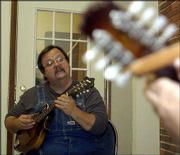 Hooked on the instrument

Alexander began his long relationship studying the guitar when he was 7 years old.

"When I first started in about 1963 ï¿½ pre Beatles I call it ï¿½ they tended to hand you the book 'Mel Bay Guitar One.' They'd start you working through it, and five or six months later, guess what, you could play 'Mary Had a Little Lamb' or 'Red River Valley.' But what they were teaching you was music, not guitar.

"The teaching of guitar and other instruments has gotten more realistic. My intention with any student is to get them playing first, get them hooked on the instrument and wanting to continue. The ones that want to go to the higher levels will start asking about theory. I can teach it, but I don't want to start teaching it to people who don't want to learn it."

The California native first came to Lawrence in 1975 while on tour with his Texas swing band. Several years later he got signed to Arista Records with The Donuts, a "jangly American twang" group. When that act disbanded, he went on to earn a master's degree in education.

For the past eight years, Alexander has made his home in Lawrence, performing with various musicians and teaching private lessons.

"I'm getting older," he adds with a grin. "And I want to pass this (knowledge) on to people before I die."