Film actor Hawke can write, too

He can act, and it turns out that film star Ethan Hawke can write, too.

Mostly, Hawke proves he has a pitch-perfect ear for dialogue that is both compelling and believable. On the down side, all that dialogue, interior and otherwise, gets a little, well, wordy.

Army Staff Sgt. Jimmy Heartsock Jr., stationed in Albany, N.Y., breaks up with his pregnant girlfriend Christy, then decides to win her back. To do this, Jimmy must drive his hormonally charged lover home to Houston. Christy seems to forgive Jimmy, though she doesn't quite forget, and the pair tool off in a 1969 Chevy Nova for the adventure of their lifetimes.

This naive, heart-strong pair are ripe for a few life lessons. They share them in alternating narratives.

"I don't know how she did it, but I felt like she was me," Jimmy says. "I think that was why I'd broken up with her: I was fighting for myself, for the old me who had lived before we'd ever met ï¿½ but then there I was, all alone again, and I realized there was no old me anymore, only this one."

Christy has many more misgivings about their future.

"I understood and had come to terms with the fact that our destiny was to break each other's hearts. ... Wearing his ring was only delay. Jimmy's great problem was that he wanted to be liked so badly ï¿½ by me, by anyone ï¿½ that he couldn't hear his own mind. This deafness made him unpredictable. You never knew when his own voice would find him."

The trip takes two significant detours, the first to Ohio to Jimmy's home, where the pair get married. And then to New Orleans, where they spend their honeymoon. In this portion of their adventures, the quirky, cynical parents of both lovers come into focus ï¿½ and a generation gap opens far and wide. The over-40s in "Ash Wednesday" are far less likable than Jimmy and Christy.

Given their parentage, Jimmy and Christy are understandably uncertain they ever want to grow up and grow old. Their youthful innocence spurs them on.

"Something has to mean something even if we have to make it up. Let's make it up: I love you; you love me. Let's stick with it," Jimmy says. 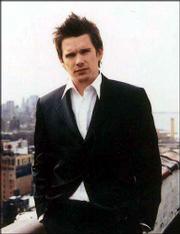 Film star Ethan Hawke has released his second novel, "Ash Wednesday." Hawke proves he has a pitch-perfect ear for dialogue that is both compelling and believable.

Of course the path to true love, as it meanders through America's heartland and the characters' mental landscape, has plenty of bumps, including a surprise turn of events that throws cold water on their passion.

Hawke makes a credible stab at keeping his characters grounded in blue-collar reality, but only half succeeds.

His lovers are more New Age spiritualists than bowling alley regulars. You can't help but search Hawke's novel for signs of celebrity.

"This girl had a friggin' fireball for a heart," Jimmy says of Christy. It's almost more fun to imagine Hawke is professing love for his actress wife, Uma Thurman.