'Idiot's Guide to the Bible' not quite idiotic

Notable for their orange-and-blue covers and good sales, "The Complete Idiot's Guide" paperbacks are certainly eclectic. Among the 550-some topics in the series: acupuncture, beer, breast-feeding, Elvis, in-laws and "Being Sexy."

In the "Spirituality and Religion" category, along with mainstream Judeo-Christian subjects, there are guides to astrology, extraterrestrial intelligence, ghosts, near-death experiences, numerology, palm-reading, horoscopes, reincarnation and vampires.

The latest in this category is the second edition of "The Complete Idiot's Guide to the Bible" (Alpha, 359 pages, $18.95) by James S. Bell Jr. and Stan Campbell. Like other "Idiot's" titles, the Bible guide has a bad case of the cutes.

The section on Jesus' resurrection from the dead is titled "Arose by Any Other Name." Authors of New Testament epistles were "doing the write thing." We're assured "the Bible never suggests that Jesus Christ was given the middle initial H."

As Mark Twain once said about the music of Wagner, "The Complete Idiot's Guide to the Bible" is better than it sounds. Despite the goofball touches, it's a solid once-over. The authors, no scholars, write knowledgeably.

It's clearly preferable to such lightweight competitors as "Don't Know Much About the Bible" or the overview volume in the "God's Word for the Biblically Inept" series.

Alpha Books apparently doesn't care that the same authors write "No-Brainers Guides" on Christianity or that Campbell did a "World's Easiest Guide to Understanding the Bible," all from other publishers.

Whether easy, dumb, idiotic or inept, the assumption is that the Bible is so complex ï¿½ if not scary ï¿½ that you might shun it and thus miss the riches of the world's most valued book.

That's a real danger. But with just a bit more effort you can follow Ben Witherington's readable "New Testament History: A Narrative Account" and, if that works, a similar Old Testament title and then a modern edition of the Bible itself.

The "Idiot's" Bible guide has a Protestant slant, for instance saying flatly that there are 66 books, omitting the added books authorized by Roman Catholic and Orthodox churches. 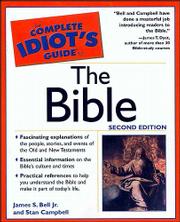 'The complete idiot's guide to the bible' includes information on acupuncture, beer and Elvis.

It's also designed to please conservatives, since it skates blithely past the problems raised by academic critics and simply takes what's on the pages at face value and historically true.

That contrasts with "The Complete Idiot's Guide to the Life of Christ," whose author, Presbyterian pastor William Grimbol, is more inclined toward liberal shrugging.

Take Jesus' virgin birth. Grimbol says there are arguments pro and con but whatever side you take, the point is that Mary was open to God's direction. But Bell and Campbell report the event (and the other New Testament miracles) matter-of-factly and note the angel's famous maxim to Mary: "With God nothing will be impossible" (Luke 1:37).

Defending belief in Jesus' bodily resurrection from the grave, Bell and Campbell figure that if the apostles knew Jesus was buried somewhere they wouldn't have been "willing to die for a lie," and if first-century Jewish or Roman leaders knew there was a body they would have dug it up and quashed the Christian movement.

Granted that the guide is a rapid run-through, it should have given at least a page to the biblical books it ignores (for example, Leviticus, Numbers, Deuteronomy), and more than a phrase to such crucial passages as Romans 13:1-7, which teaches submission to government authority.

Sample FAQ: Why did God allow the slaughter of women and children during the conquest of the Holy Land?

Answer: This was necessary because "the Israelites were incapable of coexisting with the Canaanites" without adopting their idolatry and immorality. Israelites who threatened their nation's purity were likewise put to death.