Washington — The new chairman of the National Endowment for the Arts, Dana Gioia, has big plans for the agency: a national tour of Shakespeare's plays; a national poetry recitation contest; programs for rural and military communities.

Above all, he wants to change the NEA's image. A decade after conservatives objected to such federally funded projects as Robert Mapplethorpe's photographs, which featured sadomasochistic themes, Gioia acknowledges that even he often defines the NEA by its most difficult time. 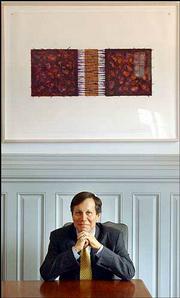 Dana Gioia, new chairman of the National Endowment for the Arts, believes new projects are a good way to overcome the agency's past troubles. He believes poetry should be read out loud and wants to sponsor a national poetry recitation contest, with winners receiving college scholarships. He's pictured at his Washington, D.C., office.

"I think my feelings toward the endowment are much like many Americans'. It's that this absolutely great institution got caught in the culture wars," he said Tuesday during an interview at his office, a bright, spacious room just down the road from the White House.

Gioia, 52, has both an artistic and commercial background. He is a poet who won a 2002 American Book Award for his third book of verse, "Interrogations at Noon." He is also a former vice president for marketing at General Foods Corp.

Nominated by President Bush and confirmed unanimously by the Senate to a four-year term, Gioia succeeds Michael Hammond, who died last year after a week in office.

Gioia presides over an organization founded during the peak of government activism, the 1960s, and still recovering from near-extinction in the 1990s. Funding for the current fiscal year is $115.7 million, much better than a few years ago, but far below what it received in the early 1980s, when the budget topped $150 million.

"My role ... is to come in and try to build a consensus, a bipartisan consensus that we fund the arts," he said, noting he has met with Congressional leaders from both parties and dined at the White House with the president and first lady Laura Bush.

"In our history, we have given 120,000 grants, of which 11 are controversial. What is the percentage? Would you put an automaker out of business because out of 120,000 cars there are problems with 11?"

Gioia already has projects he'd like to launch. He wants to sponsor a national poetry recitation contest, with winners receiving college scholarships. And he'd like a national tour of Shakespeare's plays, part of a larger goal to reach areas in the country he believes have been neglected such as rural communities.