Philadelphia — At age 50, TV Guide is showing signs of maturity. Circulation is down amid competition from newspapers that offer their own listings and TV shows that provide a steady stream of celebrity news.

But TV Guide has also adapted to the changes in the media business in recent years, with online listings, an interactive program guide and a television channel that make the most of its instantly recognizable name and logo. 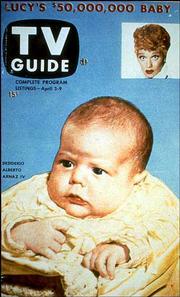 Desi Arnaz Jr. is pictured on the cover of the April 3, 1953, issue of TV Guide, the magazine's first issue. As the magazine celebrates its 50th anniversary, TV Guide has expanded to online listings, an interactive program guide and a television channel.

Founded by Philadelphia publisher Walter Annenberg, the television viewer's bible made its debut April 3, 1953, in 10 Midwest and East Coast cities with Lucille Ball's young son, Desi Arnaz Jr., on the cover. Now owned by Gemstar-TV Guide International Inc., it has 209 regional editions nationwide and more than 9 million subscribers, according to the latest figures from the Audit Bureau of Circulations.

The magazine is now just one part of TV Guide's domain. The company estimates that it reaches about 100 million users each week, when all of its various formats are considered -- the Web site, www.tvguide.com; the TV Guide Channel on cable and the TV Guide Interactive digital program listings.

As more home technology develops around the television screen, TV Guide's mission is to help readers make the most of their leisure time, not just tell them what to watch, said John Loughlin, president of the TV Guide Publishing Group.

To that end, the company plans a redesign of the magazine to make the listings easier to read. It will also have shorter stories and expanded coverage of home-entertainment products, such as DVDs and high-definition TV sets, Loughlin said.

It will also direct readers to the Web site and on-screen guides for the latest news.

"The magazine, because of its history and its size, it's at the heart of the brand, and we've got to be sure that these different platforms, these different media reinforce the same set of messages," Loughlin said.