A decade ago, the United States battled in Somalia. The University of North Carolina basketball team trounced Kansas at the Final Four. Nirvana and Pearl Jam ruled the airwaves.

And The Love Squad played its final show.

After a 10-year hiatus, The Love Squad is getting back together. Band members are, from left, Al Levine, Doug Byers, Paul Matthews and Joe Salem.

In 1993, the Lawrence quartet completed a four-year run during which it toured dozens of states, released three records and earned a full-time living from music.

But it wasn't a terminal fade.

The Love Squad is now "back." With most of its original lineup intact -- Levine, bassist Doug Byers, singer-guitarist Joe Salem and new drummer Paul Matthews -- the band is poised to issue its fourth album, "One Day Along the Mississippi Near New Orleans," and play host to a CD release show Saturday at The Bottleneck.

"I don't know if I'd call it a reunion as much as a revision," says Byers.

True, the latest Love Squad incarnation offers a more mature interpretation. The current material ditches the power-pop formula of the group's past and constructs a more sparse, alt-country flavor.

Adding to this are the changes within the lineup. Byers moves from bass to mandolin; Salem goes from electric guitar to bass; rhythm guitarist Levine is now playing lead; hard-hitting drummer Matthews is acting more as a percussionist, favoring congas and djimbes over kick and snare. 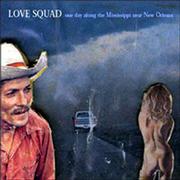 It's equally hummable but definitely different.

"As you get older you get a little more like, 'I can't listen to that!' But probably 12 years ago some 40-year-old guy was saying that about us," Byers laughs.

Formed in 1989 while the members were students at Kansas University, the group represented a welcome addition to the burgeoning Lawrence music scene. In a grunge-dominated era when bands were more interested in cranking up the distortion and attitudes, Love Squad stood out from the crowd thanks to intricate vocal harmonies and melodic songwriting.

Soon the act was packing local clubs, and the four became faced with the opportunity of pursuing the endeavor as a career.

"Three members of the band had dropped out of various stages of school," Levine recalls. "I dropped out of law school. Joe and Brad (Coffelt, one of the original drummers along with Danny Morrow) both dropped out of their senior year in college. It was a case where we decided to try and go out and make a living of this."

During this two-and-a-half-year span as a full-time enterprise, the band made several moves to other cities before returning to Lawrence. Throughout 1991 the Squad resided in San Francisco. Then it was on to Texas in 1992, spending about three months in Austin and another year in the lower Greenville section of Dallas.

Among the high points:

l Opening for actor Woody Harrelson's band at The Cabooze in Minneapolis.

"That was such a blast. It was the week 'White Men Can't Jump' was the No. 1 movie in the country," Levine recalls. "You don't want to be the opening band for a movie star. But (the audience) thought it was great."

The current Edition of The Love Squad is releasing its fourth record, "One Day Along the Mississippi Near New Orleans," after a 10-year hiatus.

l Having director Gus Van Zant ("Good Will Hunting") attend a show in Portland, Ore., because he was there filming the Keanu Reeves/River Phoenix drama "My Own Private Idaho." The bandmates hit it off with the filmmaker and ended up staying at his house. Later Van Zant invited them to watch a rough cut of "Idaho" he was screening for studio executives at a private theater.

"It always points back to the people -- the high points," says Byers. "That's what we remember: the people."

And there were some low points:

l Being lost while driving to a dubious gig in rural Mississippi.

"We couldn't find the club," Levine says. "So we stopped at a restaurant and asked a waitress where this club was.

l A show at a Westport rock venue, halted when a man barreled through waving a handgun. This sent the crowd into a panic while the band was in mid-song. Police stormed the place and arrested the instigator, who had been trying to outrun officers after robbing a neighboring business.

l An "ugly incident" while playing a fraternity party at Texas A&M. The party's "jungle theme" involved pledges garbed from the waist up in blackface, wearing grass skirts and carrying spears. The actives were dressed as hunters in Army fatigues and bearing toy guns. Following the gig, The Love Squad acted as whistle-blowers, which resulted in the band being greeted by both TV news crews and anonymous threats. The fallout for the Aggies fraternity system was considerable: The Texas legislature issued penalties and made sweeping changes.

For the Squad, the event prompted a decision to relocate back to Lawrence.

Levine says, "(We realized) Texas just isn't where we want to be."

It took a long time for the seeds of a Love Squad reunion to take root.

Byers, Levine and Matthews had collaborated together in a country cover band called The Big Rigs for many years. Meanwhile, Levine began working on a side project with the pair's help. He wanted to recruit Salem -- who'd recently moved back to Kansas City from Chicago -- to join him for vocal harmonies on the project.

But that was put on hold when the four started kicking around the idea of getting back together.

"We actually debated whether to call it The Love Squad or not," Levine says. "Three of the four of us were in Love Squad, and Paul had filled in a few times back then. People are going to think of it that way, so we might as well call it that. That also allows us to do some of the older songs. And every band who ever released an album has like 2,000 albums sitting around, so it might be a way for people to hear the old music.

The one thing that won't be duplicated, the band hopes, is the burnout that led to the original ensemble's demise.

"We were sick of touring, sick of each other -- too much pressure," Levine explains.

Byers adds, "We're not saying that The Love Squad was NOT fun, but it got to the point where it was very stressful, and there was a lot of pressure to succeed."

Now, the band believes those forces aren't a concern.

"It's not our job anymore; it's just a hobby," Byers emphasizes. "What you're going to see is us enjoying ourselves, and enjoying a little bit of creative freedom also. We're doing it more for ourselves than because of someone else's instructions."

With the original members currently in their late 30s, the days of touring the U.S. as a profession are well in the past.

Levine went on to serve as a Lawrence City Commissioner, and he now works for Pines International "selling wheat grass around the world."

Byers spent years helping to run the recently defunct Mercy Studios. He is presently a research administrator at KU.

Salem is an executive with Citibank. Matthews is a stay-at-home dad and can always be found performing with a variety of musical projects. Coffelt works in the online department of the American Heart Association.

In true Spinal Tap fashion, the band has no idea what happened to drummer Morrow.

The members say the audience at The Bottleneck can expect to see Coffelt make a trek from Dallas to sit in with The Love Squad. They also hope other ghosts from the band's past will return to haunt the club.

"We'll probably gravitate toward some of the older material because there will be a lot of fans from the old days," Byers says. "We have fans coming in from Nebraska and Texas and California. I don't know if it's going to be packed or not. Who knows who remembers us?"