Los Angeles — As U.S. forces engage in "shock and awe" tactics in Iraq, the war is getting the mock-and-guffaw treatment from political humorists.

With troops in harm's way and passions strong both in favor and against the war, comedians have had to balance their barbs against broad public sentiment. 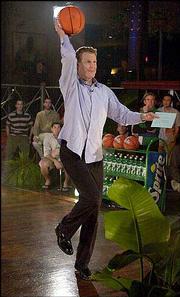 Late-night talk show hosts like Craig Kilborn are balancing pointed humor about the war in Iraq with respect for U.S. troops. Kilborn broadcast this week from New Orleans, site of the NCAA Final Four.

"There's a more nationalistic tone than there was even in the first Gulf War. Instead of just making fun of the bad guys, there's now a real 'rah-rah' element," said Robert Lichter, president of the Center for Media and Public Affairs, a nonprofit research organization based in Washington.

"There's a lot of stuff on late-night television that has an anti-authority edge. Now it has an anti-enemy edge," he added.

The safest target for ridicule remains Saddam Hussein -- with many jokes about the Iraqi leader focusing on his conspicuous absence from public view and rumors about his death.

"But you know there's some confusion now whether Saddam Hussein is actually alive or dead," David Letterman joked on CBS' "The Late Show." "They had videotape on Iraqi television earlier today, and it's so confusing. It's Saddam Hussein ... and he's speaking at his own funeral."

Other favored laughingstocks include the loose lips of Fox News reporter Geraldo Rivera, who angered the military by describing troop positions during a broadcast.

Some have mocked Rivera's macho theatrics during his Middle East reports. "Today the U.S. Army kicked Geraldo Rivera out of Iraq," Craig Kilborn said on CBS' "The Late Late Show." "Why didn't someone tell us you can kick out Geraldo?"

France, which initially opposed U.S. action in Iraq but has lately expressed support for the end of Saddam's regime, remains the butt of many jokes. "There was another war-related casualty today," Leno joked in Thursday's broadcast. "The French were injured when they tried to jump on our bandwagon."

"You can't ignore the reality," he said. "If you're a comedian, you're supposed to talk about what's going on. Instead of having an easy run of Jennifer Lopez jokes, you've got things to think about. This is where they separate the men from the boys in comedy."