Cantus audience in for double treat at today's show

Lied Center to unveil its 10th anniversary season after concert

Ticketholders for today's Cantus performance at the Lied Center are in for a double treat.

After the 2 p.m. concert by the Minneapolis-based professional male vocal ensemble, Lied Center officials will unveil what's in store for their upcoming 2003-2004 10th anniversary season. (The Lied Center opened in September 1993). The onstage presentation, to begin at 5 p.m., will highlight performing artists on next season's Lied Series. The Cantus audience is invited to stay for the announcement. 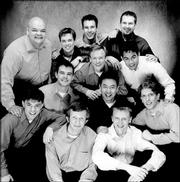 Cantus, a professional male vocal ensemble, formed in 1995 on the campus of St. Olaf College in Northfield, Minn. They will perform at 2 p.m. today at the Lied Center.

Cantus' appearance is part of the Swarthout Chamber Music Series. The group formed in 1995 after a few college friends at a hotbed for choral music, St. Olaf College in Northfield, Minn., decided they needed a diversion from the rigors of university life. The group grew to 12 members and began performing around campus. It became a full-time professional ensemble in 2000.

Cantus is quickly gaining a reputation as one of the finest male vocal chamber ensembles in the country. Its repertoire spans many periods and genres, including Gregorian chants, Renaissance motets, contemporary sacred works, art songs, folk music, spirituals, jazz standards and pop.

The group's Lied Center program will include songs with themes such as "The Diabolic and The Divine," "War and Peace," "Love" and "Bound Away -- Songs of the Earth." A preconcert lecture by Kansas University professor emeritus of music Dan Politoske will be at 1 p.m. in Oldfather Warm-up/Dance Studio at the Lied Center. Cantus also will conduct a choral master class with the Southwest Junior High School Choir.

The ensemble has received commissions from several composers, and members write and arrange much of their own music. Several of these pieces are featured on the group's choral series, Music For Men's Voices.

In addition to its work as a performing ensemble, Cantus actively promotes music education, encouraging people of all ages, especially young men, to sing. Its members are frequent clinicians at festivals, elementary, middle and high schools, as well as colleges and universities across the country. Cantus has four CDs on Cantus Recordings, a label it launched in 1997. Previous recordings include Vagabond (1998), Tidings (1998) and Introit (1997). The group's latest recording, Let Your Voice Be Heard (2001), is a collection of music from cultures around the world.