Clothing company goes to work for its community

New York — Many conservation groups criticize consumers as the problem, but Wildlife Works sees shoppers as part of the solution in making the Earth a more environmentally friendly place.

The company, which is based in San Francisco but makes its T-shirts, activewear and "bush pants" in Kenya, describes its business model as "consumer-powered conservation." 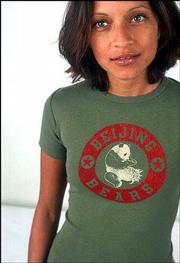 Wildlife Works sees shoppers as part of the solution in making the Earth a more environmentally friendly place.

Wildlife Works counts on the public's always changing taste for different fashions to keep its African facility and the local workers busy enough so the community can afford to keep endangered elephants and cheetahs alive.

Founder and CEO Mike Korchinsky doesn't come from a fashion background; he was more interested in the economic component of conservation. After vacationing in Africa in 1996, he says he realized that local residents turned to poaching as a method to support and feed their families -- they'd sell the valuable hides and eat the meat.

"We could've picked any product for Wildlife Works," Korchinsky says during a recent trip to New York.

He says he decided on clothing because:

l Fashion is trendy enough to get celebrity and media attention.

l It can be made with environmentally friendly materials.

l It has a high-labor content but a low-skill level.

l According to polls, the women in the 18- to 24-year-old demographic most often say they care about the environment and the future of the planet. They also are the ones who buy fitted knit cotton shirts and yoga clothes.

"We wanted a product that went beyond the conservationist community," he says. "With a cute cool product, we'll engage the mainstream (shopper) who hasn't yet been engaged by conservationists before."

Wildlife Works' in-house designer is Tammy Hulva. She comes up with the themes of each seasonal collection.

For this spring, the "endangered sports" group touts the Bondi Beach koalas and Zanzibar monkeys on T-shirts that look like classic athletic uniforms. The pink heron on a black background and a blue elephant surrounded by red stars are done in an art-deco style.

Later this year, designs featuring U.S. national parks and African wisdom symbols of love, peace and harmony will be splashed across shirts. And, Korchinsky says, in the future, he'll likely ask high-profile designers to donate ideas.

It's important to keep the look of the clothes fresh and current, he adds, because, "We don't want a product that sits in the back of the closet. The more we sell at retail, we'll get a higher price and improve awareness."

The cotton used in all of Wildlife Works garments is organic, which is both environmentally friendly and has a softer hand, but so far it's being exported from California to Kenya. "We're trying to get local Kenyan farmers to switch to organic," Korchinsky says.

Alice Ndiga, director of Kenyan site operations "My job is to explain how wildlife works in locals' lives. We need to prove to them that we can save the animals together. ... We want the people to stop killing animals because they want to."

Explaining to the adults that the local economy will reap the benefits of the factory in four or five years might seem very abstract, Ndiga says, but by improving the lives of their children, it inspires hope in them all.