Christine Riley never met her grandmother. She died before Riley was even a glimmer in her mother's eye.

But all her life, Riley has felt her grandmother's presence watching over her. 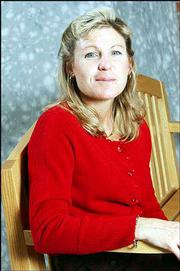 Christine Riley, Lawrence, recently published her first book, "Chester's Field," a children's story about how guardian angels can help people through tough moments in their lives.

"I know she takes care of me," Riley says, "and I have an image in my head of what she's like."

So Riley has dedicated her first book to the woman she never knew. A children's book, "Chester's Field" tells a story of hope, imagination and guardian angels who help people through rough spots. It was released in March by Lifevest Publishing.

Riley, a sales manager for a national credit bureau, wrote the 216-page book when she could squeeze in time -- on evenings and weekends, between work, taking care of her two children, spending time with her husband and competing in triathlons. It took her two years.

"It was an escape from work and the stresses of work," says Riley, who lives in Lawrence. "I went in my mind with that character. I got to go to the land of imagination.

"Fiction is fun because you create it and you make things come to life."

"Chester's Field" follows Connie, a sixth-grader from a low-income family whose classmates are all better off financially. Though they poke fun at her clothes, her natural beauty works in her favor. She meets a good-looking popular boy and is instantly taken by him but suppresses her feelings because she's sure he won't be interested. In an effort to win his affection, she tries out for the cheerleading squad. She's devastated when she doesn't make it.

She heads to a familiar park to sift through her thoughts. There she meets two orphan children who teach her about their guardian angel named Chester who lives in the Land of Make Believe. She discovers this as a place she can go to escape.

"As she learns about these two orphans' guardian angels, she realizes she has her own guardian angel, her grandmother," Riley says.

Throughout the book, 10 different guardian angels -- Angel of Beauty, Angel of Justice, Angel of Knowledge, etc. -- appear at moments when Connie needs them most.

"They teach here, especially the Angel of Beauty, that beauty is within," Riley says.

She eventually tries out for the soccer team and makes it. Turns out, the boy is quite a soccer buff, and they become friends.

"I think it really gives kids hope and belief," Riley says. "When things get really tough, they need something to hold on to."

The lessons don't stop with Connie, though. She lets her parents in on the secret of the Land of Make Believe and teaches them that guardian angels look after adults, too.

The book, filled with illustrations by Montana artist Susan Blackwood, is intended for children ages 9-14.

"There's not a lot written for that age group," Riley says.

Riley always has been interested in creative writing, especially work directed at children. Though she didn't study writing in college, she took correspondence courses in children's literature through a school in Connecticut, and "Chester's Field" grew out of a short story she wrote for class. She began writing the book in 2000.

Response so far has been positive, she says. The son of one of her close friends has latched onto the story because he's the same age as the book's protagonist and feels some of her same insecurities.

To help ensure children would enjoy the book, Riley gathered opinions from young people during the writing process. Her son Justin, now 8, heard the story and said, "You know mom, if it had like a flying white horse in there, that would be cool."

So Riley added the mythical creature in her rewrite. She and her children fondly refer to it as Justin's horse.

"It gives them an attachment to it," Riley says.

Riley also sent the draft to three sixth-grade girls -- one in Montana, one in New Jersey, and one in California.

"They loved it," Riley says.

She used their feedback to help guide her rewriting and editing.

She's already working on her next project, a book that fills in the missing two years of the Laura Ingalls Wilder story. She also has ideas to expand "Chester's Field" into a series that follows Connie through adolescence and into college.

For now, she's proud of her first book, which she feels is coming out at just the right time.

"It gives children that extra hope," Riley says. "Between the war and terrorism and who's wearing what, they're going through so many different things. They need something to cling to."