A project that celebrates the essence and spirit of Muhammad Ali through contemporary music and dance in the context of groundbreaking multimedia technology is coming to the Lied Center.

"Brown Butterfly," a 60-minute work for seven musicians and six dancers, attempts to convey the power of a man who, through controversy, adversity and triumph, became an American icon. He stood as a beacon of hope for many -- and an object of scorn for others -- during America's complex racial, social and political movement of the 1960s and 1970s. 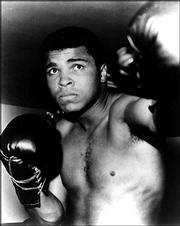 Specials to the Journal-World

Boxer Muhammad Ali is the subject of "Brown Butterfly," a multimedia performance that includes dancers, music and projected images. The show comes Saturday to the Lied Center.

Viewers will experience Ali through the aesthetic of his stunning physical strength, his ironic gestures, his quick verbal jab and his pulsating rhythm.

Craig Harris (production conception, composer, musician), Marlies Yearby (director, choreographer) and Jonas Goldstein (video artist) created "Brown Butterfly" in the tradition of the American canon of live music and dance. The added element of the newest in live multimedia techniques places this collaboration at the forefront of today's contemporary works.

At the core of the presentation is improvisation -- Ali's spontaneity as reflected in Harris's score, Yearby's movement and Goldstein's live mix of projections. Ali's dazzling footwork will be juxtaposed with images of James Brown and the onstage dance of Movin' Spirits Dance Theater.


The music created during this period by artists such as John Coltrane, Miles Davis and James Brown is echoed and revisited in Harris's score.

Harris, Yearby and Goldstein also will conduct a "Creators' Panel" for KU students in the departments of music and dance and theater and film.