Q&A with The Billions 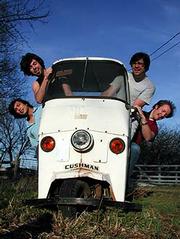 Before loading up the minivan and trailer and embarking on just their second tour, The Billions -- Dan and Sam Billen, Jared Bowes and Ken Komiya -- had reason to be pleased with themselves.

The Lawrence-based band's second full-length album, "Never Felt This Way Before," had sold more than 1,000 copies on the Internet before distribution had even begun. The record was getting substantial spins in a few major markets -- Dallas, Tulsa and Columbus -- and that was just a start. The band's Christian-oriented rock label, Northern Records out of California, had just begun its radio push.

The crucial college radio push by indie promotion masters Team Clermont wouldn't start until after the tour. Still, about half the stops on the tour were in churches and at other youth group joints -- just the audience they thought their label had already reached.

"Nobody was at the shows. It was a horrible tour," said Sam Billen.

As for the non-church stops, brother Dan Billen picks up, "We'd play this big huge town, we'd drive by all these music halls and be like Yes! And then we'd keep going, keep looking at the map for the venue. We'd go over the tracks, down behind their local strip club, and to this little tiny shack with like two gutter punks standing out front and not even a homemade flyer up. Half the places we played didn't even have signs for the place. It was just some ram-shackled little warehouse. Nothing! Not even a PA. They'd have a microphone and a little speaker. It was the worst."

When they got home, they called their label. They needed a dedicated manager to book their tours, as opposed to the overworked, volunteer help who booked this tour.

"We told them this is total insanity," Dan said. "If you want this to be our career, this is not going to work."

Lawrence.com :: Have you tried to find an agent on your own, outside what Northern has hooked you up with?

Sam :: "I did talk to the manager of The Butthole Surfers."

Dan :: "(laughing) It was horrible. He seemed like the classic, skeezy old dude in the movies, sitting in his greasy old office with piles of records everywhere."

Sam :: He's like, 'Don't care where you play. You can play in a pet shop parking lot. As long as you're out there playing!'

Dan :: "'Play for one person!' We're like, we just did that. It sucked! We don't want to do that again. It's a waste of time. You don't build on that. When you tally all that up, after five years of playing for three people, you've spent thousands and thousands of dollars just in gas and whatever. It's just stupid. We're looking to make this into a career. We AT LEAST want to play for a small room of people. Not just for nobody. We've played some shows where the promoter wouldn't even come in and watch!"

Have you tried booking your own shows?

Sam :: "We set up the first and last show of the tour and those were the highest paying shows. Both of those had like 200 kids at them. One was at Des Moines, just at some little church youth group, but there were millions of little kids running around. We sold so much merch. The last one was at Taylor University in Indiana. There were tons of kids there. And some people from Parasol came to see us."

So would you rather play the youth group-type shows than bars?

Sam :: "No that's not what we want, that's just what we got set up with. We wouldn't mind playing half youth groups and half Bottleneck-type places, just as long as we get paid."

Sam :: " ...We were just really scared that our label was pushing us over to the Christian side, saying, 'This is where we can make money, this is where we want you guys.'"

Sam :: "The Christian market is just another money-making scheme."

Sam :: "Before we're the next DC Talk that tries to cross over."

Do you have to choose between being a Christian band or being a secular band?

Dan :: "Well, we're going to be distributed both ways. But you kinda have to choose. I thought you could do both but you really can't. If you go -- we call it 'secular,' I guess you could say mainstream' -- if you go mainstream then the Christian world rejects you. Or you can go Christian and the mainstream world will reject you. Unless you have like multiple personalities, you can't really do both."

Sam :: "I don't want people to like our music because we're Christian. (I'd rather) they like us because of the music and then find out we're Christian ..."

So Team Clermont is picking up promotion on the 'secular side'?

Sam :: Yeah ... starting next month or something, and Parasol is going to distribute it.

Dan :: So we'll have a pretty fair shot at the college radio world.

If you could pick a band to tour with, who would it be?

Sam :: (Going through) Arrow Booking would be the best. Because they have Death Cab for Cutie and Pedro the Lion and all those we like. But I don't even know if people who like that would like us, you know because we're just kinda more quirky. Maybe like Koufax or Built To Spill, I don't even know ...

Dan :: We would take anything we could get right now, except for crap. Anything.

What do you think of The People's success?

Dan :: They're gettin' lucky. No, I'm just joking. We're friends with them. But I've heard so much stuff they're doing, it's freaking me out.

So how did such a crappy tour put things into perspective for you guys? Have you had second thoughts about your career choice?

Dan :: "We were all gettin' kind of bitter (on the road), because we thought we had this tight little album. But we're just so much further back than we thought. I thought we were rollin'. It's just like when we were younger and we'd hand out 500 flyers, and there'd be five people there. (laughs) It wasn't all bad. It's just that the bad ones were just so bad that it was hard to see past them."

Sam :: "Once stuff goes out to college radio, I'm just hoping somebody hears us through that and starts contacting us."

Dan :: "It sounds weird, but so far we've just had faith and it's all worked out. The right doors open and the right doors closed. I mean, we're sitting HERE talkin'."