By By Monica White - Special to the Journal-World

Sweet Honey In The Rock sings from a relatively isolated boulder in the modern music industry. It's a spot where love and respect -- not dollars and glitz -- are the real measures of musical success, and artists feel an obligation to draw attention to injustices in the world.

Sweet Honey's music, created by five black women and one sign language interpreter, has talked with the people, for the people, but never down to the people for three decades. 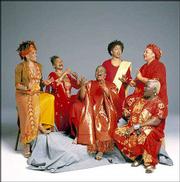 Sweet Honey in the Rock has performed together for 30 years. The Grammy-winning group released its latest album, "The Women Gather," in January.

"There is a strong undeniable power in music, and musicians have a responsibility to use this wisely," said Ysaye Maria Barnwell, bass vocalist in the Grammy award-winning a cappella ensemble that released its first record in 1976. "It's a responsibility to yourself, to those who have passed things on to you, and to the community in general."

The ensemble will bring its fusion of gospels, spirituals, jazz and blues to the Lied Center at 7:30 p.m. Sunday.

"Music, like all other art, always reflects where we (society) are," said Barnwell, who acknowledges progress in human rights, especially during the civil rights movement. "But I also feel like there are forces that would turn that around in a heartbeat."

Barnwell added, "The ways in which people perceive each other, whether it is another gender, another generation, or race or culture, show us that we still have a lot of work to do."

The group's exploration in a capella harmonies and African percussion-driven rhythms allows its powerful words to resonate long after the last note is voiced.


Rooted in music of the black church and freedom songs from the civil rights movement, Sweet Honey delves into the genres of African and Caribbean music, blues, jazz, soul, doo-wop and hip-hop to piece together a historical tale. The layered, five-part harmonies take on an element of improvisation with each live performance.

"We interact with each other," Barnwell said. "We sing the way we feel at the moment."

The group was created in 1973 by Johnson Reagon, who began her work performing music as an original member of Martin Luther King's Jr.'s Student Nonviolent Coordinating Committee Freedom Singers. The first song Johnson Reagon taught the new group -- originally a quartet, now a quintet -- was "Sweet Honey in the Rock," which was based on a religious parable she learned as a child. The parable, her father explained, told of a land so rich that when rocks were cracked open, honey flowed from them. The image provided a suitable metaphor of black women: strong as a rock, sweet as honey.

Sweet Honey membership has varied through the years. Each new singer contributes her own strengths and background, and the musical style continues to evolve.

"I had had a fairly intense career already when I got into Sweet Honey," said Barnwell, a native New Yorker who never expected to become a member of the group. As a teacher in a dental school, she had seen a few performances when she was asked to join.

Along with performing and teaching, Barnwell holds a master's degree in speech pathology and a doctorate in philosophy and public health. She's a professor at Howard University and balances various projects as a composer, musical consultant, actress and author.

"My sense is the CD reflects many of the things that we've all been experiencing the past couple of years," Barnwell said.

"Let us Rise in Love" is a response to the events of 9-11. The words ponder what would have happened if the U.S. government had searched for understanding rather than unleashing a retaliatory military response.

"And how do we really explain this to our children so that they can develop an understanding of their responsibilities as world citizens?" Sweet Honey sings.

The title track tells the story of violence against families. "Give the People The Right to Vote" details the historical hurdles of obtaining voting rights in Washington, D.C., while the "Ballad of Harry T. Moore," shares the tragic tale of a civil rights activist through lyrics such as, "No bomb can kill the dreams I hold/For freedom never dies."

Sweet Honey does not profess to have THE answer, however, said Barnwell, "Our audience is expecting us to articulate what they are feeling."

Impending war and its onset have moved several artists -- Dixie Chicks and Michael Moore are examples -- to voice their dissent. Many of those artists have been criticized for articulating their political views.

But Sweet Honey is on an independent record label, EarthBeat, which Barnwell said gives the act more latitude.

"I think we have an advantage because we've been speaking our minds for 30 years," Barnwell said.

"This is not the time for us to drop the values upon which this country was founded, which has to do with the right to dissent," she added. "Folks are sometimes surprised that their favorite artist is actually thinking about these things and would dare to speak out."