The People :: Kansas City band about to break out 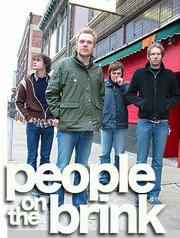 Kansas City rock band The People - (L to R) Harry Anderson, Ben Grimes, Kenn Jankowski and Ryan Shank - stand outside the Brick, one of their favorite places to play.

There's an air of suspense hovering around The People.

The Kansas City band has plenty to be excited about: an impending record deal, tours with Nada Surf and Idlewild and a rising local profile that benefited from a well-attended gig with Interpol at The Madrid Theater last January.

But keyboardist and guitarist Kenn Jankowski has more pressing concerns.

"In a couple days, I'll know if I'm single or not," Jankowski deadpanned, responding to a question about life outside the band.

Laughter broke out among his bandmates as they tried to discern whether he was serious. Vocalist and guitarist Ben Grimes thought maybe he wasn't.

"Don't print that," Grimes managed to utter between the chuckles.

"No, it's all right," Jankowski replied. "It's the truth. That's why people love us, man. That's why our band is hot right now."

Everyday People
If not for their shameless honesty in interviews, perhaps the reason people like The People is because the members stick to their convictions. Their dedication to rock music's most basic principle -- write a hook and play it like you mean it -- is unusual in a town where past bands such as Shiner and Giant's Chair sound like they skipped straight ahead to graduate school.

"If there's one thing I hate about the 'Kansas City Sound,' it's the fact that most bands in Kansas City sound like they're influenced by other bands from Kansas City," drummer Ryan Shank said.

Instead, The People takes cues from glam-rock performers like T-Rex and David Bowie (although Grimes insists the '80s is his favorite Bowie period) and grind them into the golden path laid down by the Stones and Beatles. It's a formula that won't win the members many accolades for originality but may just get them a record deal and a whole bunch of fans.

"I like my band a lot, but I guess I still don't totally see what it is that's gotten us the interest that we've gotten," Grimes said. "A lot of the people that we've talked to (about) how they perceive our band, I tend to totally disagree with. But I'm not gonna be like, 'No, no we're not original at all, are you crazy?' and get all my records and be like, 'No, see, I ripped off this here and this here' and stuff like that."

As modestly as Grimes talks about his band, the truth is that it has come a long way since releasing "The Premise is Sound" in 2000. Back then, The People was a five-piece glam-rock band that wore black stage outfits and dabbled with eyeliner.

"When we put the band together we used our influences in the wrong way so that it was a little too blatant and a little over-the-top and very immature I think," Grimes said. "Now we've kind of settled back into something more personal and song-oriented. It feels like we're the band as opposed to a bunch of other bands that we're channeling."

People come together
After an extended series of lineup changes, founding members Grimes and Shank finally found a formula that clicked in October 2001.

Harry Anderson joined fresh off the heels of Reflector's breakup, and keyboardist/guitarist Jankowski finally committed to the band after a nine-month hiatus. In less than two months, they secured an opening slot for Koufax at el Torreon in Kansas City.

"The response was really, really good," Grimes said. "It was like, 'Wow, we've got something good! Yes! Finally!'"

Other spoils quickly followed. A representative from Atlantic Records contacted the band after hearing its song "Robots" on MP3.com. The contact failed to deliver a record deal but did inspire the band to quickly churn out a demo.

The ensuing "Basement Recordings" represents the only studio output of the new lineup thus far. At the request of friends and fans, the band began selling the demo at shows.

"It puts gas in the van," Anderson said.

Power to the People
The demo reached one particularly important set of ears in New York City. Ben Weber offered to manage the band after hearing the demo on a recommendation from Ultimate Fakebook's Bill McShane. With Weber's help, The People booked a showcase at The Mercury Lounge in NYC and played for representatives from records labels such as Warner Brothers, Astralwerks, Capitol, Columbia and Universal.

Since the showcase, the band members said they've been in serious discussions with a label, though they're sworn to secrecy until the deal is complete.

"It may or may not be any of the labels we mentioned earlier," Jankowski offered.

Negotiating has been a long and tenuous process for the band.

"If we had wanted to, we could have signed with them last year," Grimes said. "They've been after us for the most part, and we've just been trying to shape everything."

In lieu of making its debut record, the band has instead focused on touring. Last month the quartet embarked on a largely sold-out 17-date tour with Nada Surf and Norway's Sondre Lerche.

"The tour was everything we could have hoped for it to be," Grimes said. "Sondre Lerche and Nada Surf were both just amazing. Every night of the tour we could sit there and watch their whole sets and never get bored with them.

"Sondre taught us how to say 'Hello, we are The People' in Norwegian, but it's just 'Hallo ve ar The People.'

"So then I went around telling everybody that Norwegian wasn't actually a language, that they just picked out a weird accent to speak English with."

Nada Surf lead singer Matthew Caws inspired one of The People's best tour memories when he wore a People shirt on "Late Night with Conan O'Brien."

"You could see --he --EOPLE," said Anderson, who watched the show live with the rest of the gang.

The band will head back out on the road April 21 for four dates with Idlewild and a slot at Chicago's International Pop Overthrow Festival.

Grimes said one of the group's immediate goals was to build a following in Lawrence.

"Lawrence is a little tougher than Kansas City because it's a little more hip. And it seems like people there are a bit slower to decide what they think of a band because there's so much music that goes through there," he said.

"People being in school and being poor and all that; it's a little harder to get them to come out to shows."