Lawrence composer Jesse Krebs wrote the trombone concerto that the orchestra commissioned for the program, and the Stephen Paul Wunsch Foundation for Young Musicians funded the commission. Some years ago, when Krebs was a music student, the same foundation gave him scholarship money to help with his studies. 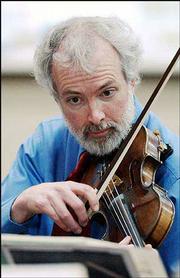 Trombone virtuoso David Vining of the University of Cincinnati College-Conservatory of Music will be the featured soloist for the premiere of Krebs' new work. Vining, now considered a master in music circles, once taught trombone at Kansas University. His wife, Leslie, once was a manager and violinist for the Lawrence Chamber Orchestra.

And the guest conductor for today's performance, internationally renowned Zuohuang Chen, is taking time out of his hectic schedule to lead the orchestra -- just like he did back on Feb. 15, 1987.

"This concert is amazing for all the connections," violinist Eric Williams said.

The show, which wraps up the orchestra's 31st season, begins at 2 p.m. in the Free State High School auditorium, 4700 Overland Drive. Before the concert, Krebs and Vining will talk about the musical creative process.

In addition to Krebs' concerto, the concert will include performances by the winners of the Lawrence Chamber Orchestra's Young Artist Competition, held this spring and sponsored by the Wunsch Foundation. Anne Kettle, a senior at Free State, will perform the first movement of Richard Strauss' Horn Concerto No. 1 in E flat major. Kettle is a student of Kansas University professor David Bushouse. Lawrence High School senior Oswald Backus V will perform the first movement of Bottesini's Concerto No. 2 in A minor for double bass. Backus studies with KU professor Larry Rice.

"There's something for everybody on this concert," Williams said.

Krebs, who has a bachelor's degree in classical composition from KU and a master's degree in jazz and contemporary media from the Eastman School of Music in Rochester, N.Y., described his concerto as "modern classical music" of a fairly aggressive nature.

"The trombone is a very powerful instrument that has a lot of attack and force to it," he said, adding that "Dave Vining is really one of the great trombone virtuosos in the world.

"Getting to write a piece for him is, at the risk of being cliche, a thrilling opportunity. The only limitations I have are the practical limitations of the instrument itself."

Williams, who rehearsed the ensemble parts with the orchestra last week, said the piece was saturated with energy and vitality.

"The first and third movements just fly by. It's quite intense and angular. The center movement is a slow layering of chords, and it really is a wonderful contrast to the two outer movements," Williams said. "Throughout it all, the trombone is asked to do some amazing feats."

The musicians will be under the direction of another internationally recognized name in Chen. Though he travels extensively -- one of the orchestras he's conducting this year is based in Mexico City -- he makes his home in Olathe. Conducting the Lawrence orchestra was a chance for him to stay home for a few days, Williams said.

"When I contacted him to see if he would be willing to conduct this program, he mentioned that he had good memories of the orchestra," he added.

Chen directed the KU Symphony Orchestra from 1985 to 1987. He was given the HOPE award for outstanding teaching in 1986. In recent years, Chen has visited more than 20 countries as a guest conductor for 30 orchestras.